New York City’s Q Diamond train was retired from service this weekend, and a merry group of mourners held a party for its last ride.


On Friday February 20th, 2004 the MTA is retiring the Q Diamond train after more than 20 solid years of service, to make way for ‘progress’ and ‘faster trains’ over the newly restored express tracks on the Manhattan Bridge. Well, we aren’t letting the Q Diamond disappear without a party honoring its awesome service.– Anonymous email received February 18, 2004.


At 9:28 p.m. on Friday, Feb. 20, 2004, the last Q Diamond train in history ran through Union Square on its way to Brighton Beach. Several hundred people had gathered on the platform, and now they piled into the last two cars. In the second-to-last car, the stainless steel bars were decorated with black, furry material. In the last car, yellow ‘CAUTION’ strips, which had each been modified to say ‘QUATION,’ were taped to the ceiling. 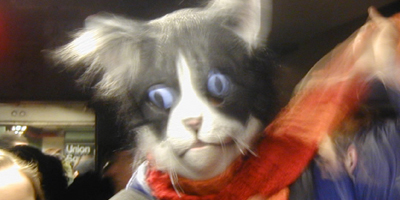 All photographs by Paul Ford


The theme, according to the anonymous email, was ‘New Orleans funeral,’ so many wore black, and one woman carried an umbrella fringed with tinsel. It was a goofy throng, a few in different masks. At the beginning, everyone was trying to make it fun, but eventually we settled into a good rhythm, some a little drunk, both cars filled with smoke. Most of the advertising placards had been removed and replaced by prints and sketches. We headed on to Brighton Beach with a cheer. 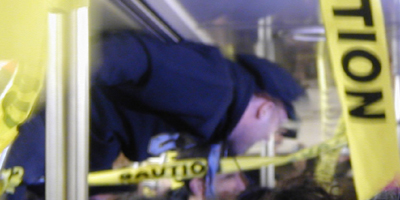 The straphangers already riding the train found the whole thing funny, and took the offered hors d’oeuvre graciously. We made room for them to get off when their stops arrived. People began to shred the advertisements remaining on the walls, which was satisfying to see. 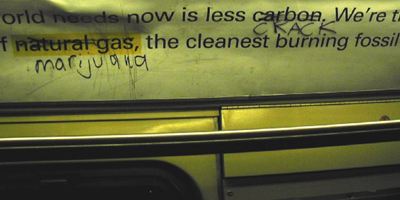 Each of the two cars took on its own character. The last car, with the yellow ‘QUATION’ strips, had more drinking and crowd surfing. It was filled to the doors, but hardly more crowded than a regular rush hour, and not much noisier than those unfortunate trips when an elementary school on a field trip enters your car. As the train rounded curves or braked, everyone slipped and yelled, laughing. The second-to-last car was about half as crowded, and people were chatting rather than yelling. 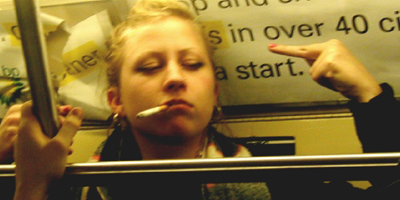 At Brighton Beach, the throng came out onto the platform. Our party cars were a mess, but nothing dramatic, except that someone had tagged the walls with a Sharpie. That person was arrested, and then we got back onto another train on a way to a follow-up party. One woman tried to have us all stay back in solidarity with the arrested taggers, holding the doors and hectoring us, but no one else cared much. Out of nowhere, a man with a ‘Q’ written on his forehead yelled, ‘There’s no law against tagging yourself!’ and scribbled an arrow on the tail of his ‘Q.’ 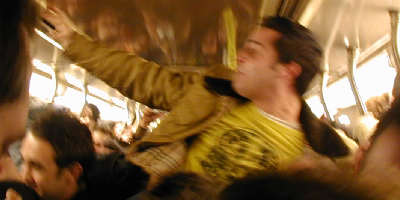 We got off at Cortelyou Road and walked a few blocks. It’s a suburban part of Brooklyn, and the houses look as if they belong on Cape Cod. Finding the party was no problem, as it had spilled over onto a porch. I asked a tall man if he had a bottle opener. He took my beer and pried it open with his teeth. There was some dancing. I talked with a man wearing a bolo. He writes math books, and had a good look, with a long camelhair jacket he told me he’d stolen from his friend. Soon after they played ‘Hey Ya!’ it was time to go. 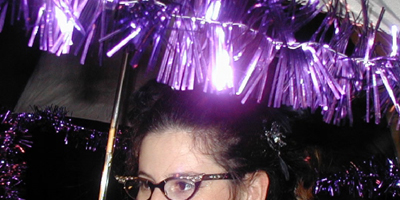 I felt bad about the mess on the trains, because someone else was going to have to clean up after us, although it’s mostly some extra sweeping, a few minutes on top of the regular cleaning. For 300 people we weren’t too bad. 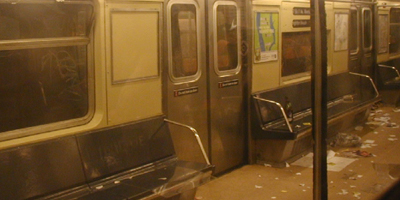