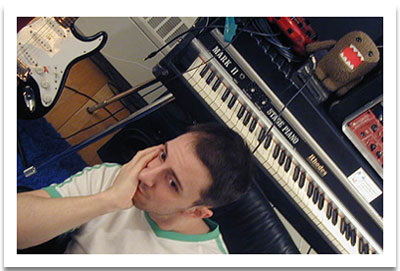 ‘People are wondering why I would leave this fantastic kids show and try to make it as a musician,’ Steve Burns says, holding a guitar pick in his hand. ‘And it was fantastic. But when I say, ‘Well, I did Blue’s Clues for six years,’ they usually say, ‘Six years?’ And they suddenly understand why I might need to do something else.’

After six years of dressing in a green striped shirt and talking to condiments, kiddie-show host Burns is becoming a rocker, and, by many accounts, not a bad one. Signed to Play It Again Sam Records with a forthcoming album of ‘songs about science and love’ called Songs for Dust Mites, produced with help from the Flaming Lips’ Steven Drozd and luminaries including David Fridmann (The Flaming Lips, Mercury Rev, the Delgados, Luna) and Ed Buller (Suede, Pulp), Burns seems ready to conquer the adult world as well. And the surprise? The songs are not bad. One or two even shine.

Paul Ford: So…what’s the question everyone asks you?

PF: And the answer?

PF: Pretty good. I guess the first real question would be, how did you hook up with [producer] David Fridmann?

SB: Well, first of all I’ve been writing songs forever, for myself and my friends. I was in about 4,000 high-school and college bands. So once Blue’s Clues was over and I found myself in a position where I could do what I wanted, I decided that this would be how it would go. So I wrote him an email introducing myself, and it happened to be on the same day his son had a Blue’s Clues party, and I sent him some demos. He liked them enough to want to work with me. So up I went to Tarbox Road Studios in Fredonia, New York, and he put me in touch with Steven Drozd.

SB: Drozd is a multi-talented instrumentalist in the band the Flaming Lips, and a fantastic human being. A lot of the Flaming Lips sound, which I worship, comes right out of his head. He and Fridmann gave me a lot of help in understanding the studio process, how it all works, how to take a musical idea and shine it up into a song.

SB: He wrote me, sort of in disbelief. He’s got a kid, too, and so he searched me out through the web and I think he downloaded the songs expecting to make fun of me, thinking he’d found the next Shatner, and was shocked that, you know, they weren’t bad. So he gave me a ring, and I thought, sure, who wouldn’t want to work with Ed Buller?

I also want to mention here that I worked quite a bit with Mike Rubin of Murmur Music, and I think some of the best work on the album came out of that relationship.

PF: I started a band myself a few years ago, and it really hasn’t gone anywhere.

SB: It can be really tough.

PF: I play trombone, we’re punk-rock brass. You should check us out. You just wonder if you ever will make it. If anyone will ever believe in you enough to give you a contract.

SB: Oh, I understand. I still lie awake in terror, trying to bring all this stuff together. It’s not easy.

PF: And I think to myself, what does this guy have that I don’t have? Really, it’s just that you’re a famous TV star, right? Like, there’s no inherent musical merit or anything. You just bought your way in.

SB: Well, Paul, that’s kind of rude. I’d disagree. I mean, after the show ended I sat in my room for a year and worked on demo songs, worked them over about 50,000 times each. I was terrified to show them to anyone.

PF: I mean, nothing is going right for me. I just keep screwing up, and my girlfriend and I aren’t working out, and you’re sitting there high on the hog, so to speak. And there’s frankly no work out there for anyone, and I’m writing for this site that pays me in beer.

SB: How am I supposed to answer that?

PF: This isn’t Jeopardy, dogtalker. You don’t have to answer in the form of a question.

PF: No! I am the interviewer and I have control. Total. Control.

SB: Okay. I want you to stop that attitude.

PF: I want you to shut up! I write the interview. You will do anything I say!

SB: Come off of this.

PF: Say ‘I am a marsupial, that’s a kind of Republican, and I love tea leaves.’

SB: I am a marsupial, that’s a kind of Republican, and I love tea leaves. How did you do that?

PF: I can make you write the word ‘kitten’ on a Post-It note and stick it on your head.

SB: Why in God’s name would I do that?

PF: These are my words! Mine! I control the interview! Do as I say!

PF: You have no choice! You are the interview-ee. I am the interview-er. I create you in the image I choose. I am so tired of people like you getting all the gravy. It’s my turn. 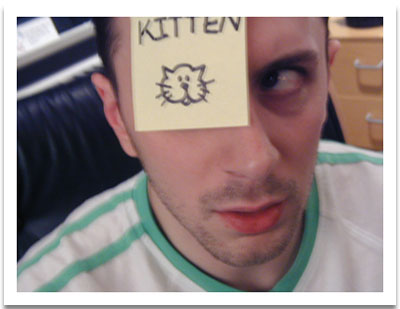 PF: Now you understand the power. And yet you laugh at me from your high and mighty horse.

SB: That’s a mixed metaphor, you mean high horse, or…

PF: How dare you! Write the word ‘minion’ on another Post-It.

PF: Write a stripe through the ‘O’ to make it a zero.

PF: Do as I say! Make it cool like Sigur Rós! I am the interviewer!

SB: You’re leaving, right? That’s the end of the interview for me.

PF: Much better. So I have a lot of spare time, I get into mind control and hypnosis, you know. For fun. Not hard stuff to learn, mind control. Because I have all this time because my girlfriend left me and it’s not like my music career is going anywhere. My girlfriend moved out and took my sofa so I sit on the floor and think about mind control and how everything is falling away. So you will put this on your face now, this Post-It that says ‘minion.’ 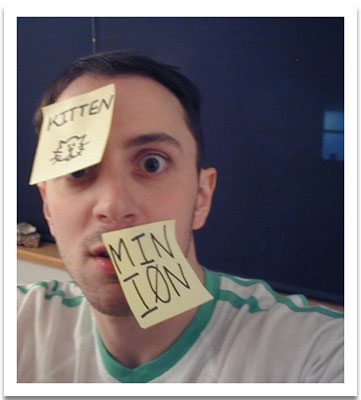 SB: Look, I don’t know what you are but I’m calling the cops. 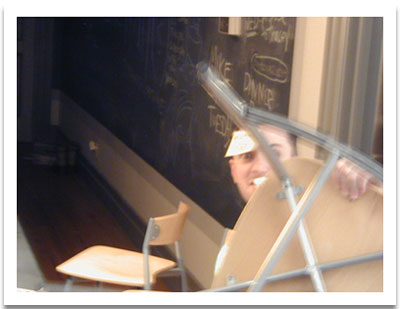 PF: Put down the chair. You cannot hurt me.

PF: It will put the lotion in the basket.

PF: Why? Why shouldn’t I have all this? Why should I sit at home and watch my girlfriend leave and read mind-control books and not have anything nice happen to me? My puppy Edgar died of colitis when I was seven. I still have a baby tooth. Do you know that? A baby tooth. It talks to me. I think it’s my twin.

PF: You think I’m crazy. I just like to talk a lot about things. I never hurt anyone again after that either. Not that I can tell you about. It’s fine. I love your music. I would never hurt you. I love you. I just want to be a friend. Here, come here, let me sing you one of the songs my band plays. We can go on tour together. 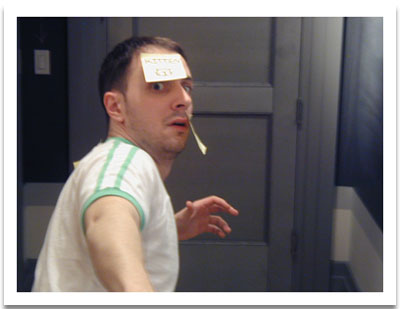 PF: We can be friends forever.