“A collector, maker, and breaker of things,” since 1997 Bill Keaggy has amassed a collection of over 700 grocery lists. Francis Raven talks with him about his collecting habits and why it is that nobody can spell “bannana” “bananna” “banana.”

You can visit Bill Keaggy online here and view his collection of grocery lists here. 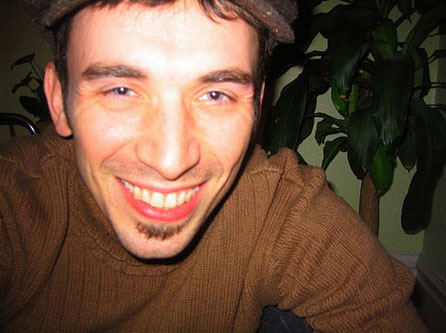 How did you start collecting grocery lists?

I found an abandoned grocery list in a St. Louis Schnuck’s parking lot in 1996 or 1997. Quite simply, I decided to keep them every time I came across one. And the internet is a great place to do stupid things. I don’t really keep track of where each list is from. I sort of wish I had when I started, but this project is ridiculous enough without having to scientifically catalog each item. Most of them were found by me in St. Louis, but numerous people from around the world have contributed to the collection since it started, including a couple of wonderful people who have donated in the hundreds. Thank you! You can donate as well, but there are rules.

Do you collect other things?

Um, yeah. Vintage box cameras (cheap ones), rocks shaped like shoes, dirt, discarded bookmarks, stuff I find in the street, and some other stuff I can’t remember right now.

Do you think you have a collecting gene?

Yes. My dad’s great at saving things—only he saves useful things and makes stuff out of them. I save useless things and put them in boxes and on websites. My mom’s also pretty organized and saves neat stuff. Oh, and my dad has what is likely the largest private collection of Reddy Kilowatt (corporate spokestoon for the Alabama Power Company who first appeared in 1926).

Where are you from? And how does it effect your collections?

I was born in Youngstown, raised in Columbiana, Ohio. I think growing up in a small town may have enhanced my appreciation for ordinary things. And being near a place like Youngstown certainly exposed me to used, forgotten, rundown things.

What’s the quality you are looking for in a good shopping list?

I’m never looking for anything specific, I just love the fun (or dull) surprise that comes with finding any list.

Do you find it hard to write grocery lists yourself now that you know all of the possibilities?

It’s not hard, but I should probably have more fun with them, like writing strange things on them and leaving them behind for someone else to find.

Do you have a favorite shopping list, and why?

I like the strange, short ones. Ones that have odd combinations, or are just so simple that you wonder why they made a list in the first place. You can view some my favorites here.

What have you learned from the experience of collecting grocery lists?

More people than I thought like onions. “Mayonnaise” is difficult to spell. So is “banana,” apparently. And “anchovies.” And “yogurt.” There are a lot of notepads out there touting the greatness of numerous bizarrely named pharmaceuticals. I used to think my handwriting was lame. Now I don’t. And lastly, very few people leave their grocery lists in the cart—like they should! 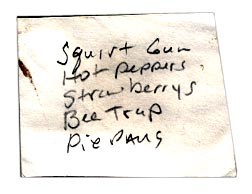 What does a person’s shopping list tell you about them?

Honestly, nothing. It’s all what I read into them. It’s pretty easy (and fun) to make judgments and assume things about the lists and the list-makers’ lives, though.

This is an ongoing collection. I have other collections that have self-imposed limits, but not this one. Time is the biggest restriction. If I didn’t have a job (or a family) I could devote 100 percent of my life to wasting other peoples’ time! Just kidding, sort of.

What makes you laugh?

What is a good charity to give money to?

There are many, but we like to support the National Parks Conservation Association.