How the Internet Changed the World

Experts answer what they know. The Non-Expert answers anything. This week we assist a mother with her daughter’s homework: imagining a world where emails required stamps.

Have a question? Need some advice? Ignored by everyone else? Send us your questions via email. The Non-Expert handles all subjects and is updated on Fridays, and is written by a member of The Morning News staff.

Thank you for all the stories over all the years, they and you are lovely. I’ve always thought of writing a question to the Non-Expert, and now actually I have a dilemma that could use some Non-Expert advice. Our daughter, who is nine, needs some ideas for a class project next month. Ready for the topic? How the internet has changed the world. Suffice it to say, I only have negative opinions about that.

Well, I hope this is the sort of question you’re looking for. Keep up the good work.

Answer: How the internet has changed the world… That’s a little like an assignment on how walking upright transformed the human race. History will someday look back on the mid-1990s as mankind’s next evolutionary step. After all, weren’t we some type of King Kong-esque beast before we started riding Segways and drinking chai at WiFi hotspots?

Here’s the blueprint for Sally’s A-plus: a documentary that both perfectly illustrates how our world has changed and increases Sally’s multimedia savvy by at least 10 gigs.

Begin with lots of zeroes and ones flashing past the screen. You can get this by downloading a Matrix screensaver.

Then we get Sally “on location.” She is wearing Doc Marten boots and a flannel button-down while performing contemporary day-to-day tasks—without using the internet. These could include—but are not limited to—Googling information, emailing her friends, and creating a MySpace profile.

You’re unpacking the groceries when Sally walks in and starts tapping you on the arm.

YOU: What about it?

SALLY (to herself): Did I spell it wrong?

YOU: Spell what wrong?

YOU: That spells Maryland.

YOU: Sweetie, the Maryland state bird is an Oriole. It’s a black bird with an orange belly. Are you OK?

This is where the video starts to look real old-timey. Sally sits down at a desk and gazes out the window while using a pehn to make swirly shapes on a piece of payper. (Forgive me if I’m misspelling anything. Some of these words are so out of date, spell check doesn’t even recognize them.) Since she’s still quite young, we see you proofreading her lehtir before she seals it up into a larger folded piece of payper known as an ennvilowp. 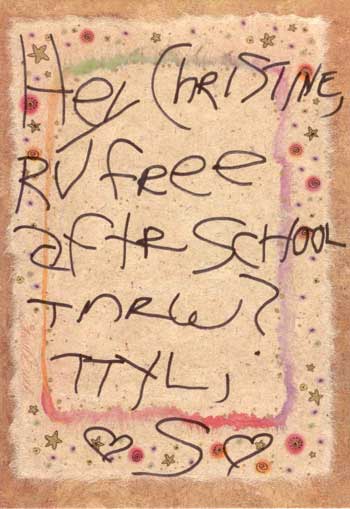 Sally puts a stahmpe on the lehtir and males it with great satisfaction. Cut to the next day when Sally angrily approaches her friend Christine.

SALLY: Where were you yesterday?

CHRISTINE: I had ballet.

SALLY: Didn’t you get my message?

SALLY: I asked you if you wanted to hang out.

SALLY: Hm, the maleman must have a virus.

CHRISTINE: That sucks. He should run Live Update.

Crafting a MySpace profile without the internet will be the most fun of all. It’s like scrapbooking, but bigger! We watch as Sally goes to her local CVS and buys a giant piece of postirbored and a tablett of construction payper. From memory, she cuts out pieces of payper and glues them in place on the postirbored to match the layout of a MySpace profile. Then she handrytes all her personal information. For example, the “Who I’d like to meet” section:

“Other people with payper MySpace profiles. Pehn pals to ryte lehtirs to. Cool kids who want to interface face-to-face.”

Sally then asks everyone she knows and likes to be her MySpace friend.

SALLY: Hey Morgan, will you be my MySpace friend?

MORGAN: Sure, send me an invite.

SALLY: No, I was hoping you could give me a photo and I could paste it to this large piece of postirbored.

SALLY: Oh, well. Maybe you’d like to fill out this indecks kard and I’ll gloo it under “Sally’s Friends’ Comments.”

MORGAN: Sure. (Morgan writes, “Get with the times.”)

SALLY: I am. I read The Times. The actual newspaper.

SALLY: Joey, do you want to be my MySpace friend?

JOEY: I would, but you’ve been freaking me out a little since you started carrying around that giant postir all the time.

SALLY: This is my MySpace profile. Can I take a Polaroid of you and paste it on under where I rote, “Sally’s Friend Space?”

JOEY: How about I take a digital shot of you and email it to my whole address book with the subject line, “Wack?”

SALLY: That retort was almost as clever as one I read in Othello.

JOEY: [Has left the scene]

SALLY: Even after puberty, I will never want to make the beast with two backs with you.

I hope this offers a good foundation on which to base Sally’s project. It may even make her an internet celebrity. Which means she could get blogged about on TMZ, and no one over 32 will know who she is.