The American South has many strange places to visit, though most towns don’t have their own Hanging Gardens of Babylon, complete with plastic elephants.

CULLMAN, ALABAMA—In many ways, Joseph Zoettl led an unremarkable life. Born in 1878 in Germany, he immigrated to the United States as a teenager and settled in northern Alabama. Soon afterward he began studying at a newly founded Benedictine monastery, St. Bernard’s, where he took his vows in 1897. He ran the monastery’s power plant and was, even by monk standards, a withdrawn, quiet man. Until his death in 1961, Brother Joe rarely left Alabama.

On the other hand, Brother Joe built 125 intricate, religiously themed sculptures out of trash.

Collectively known as the Ave Maria Grotto (after one of the major works), the sculptures are built almost entirely of discarded building supplies, tile chips, plastic animals, toilet bowl floats, and cold cream jars, among other things. Most of Brother Joe’s oeuvre, which was listed on the National Registry of Historic Places in 1984, is composed of models of Christian sites around the world—Lourdes Cathedral in France, the World Peace Church in Hiroshima—but it also includes such oddities as ‘Hansel and Gretel Visit the Temple of the Fairies’ and ‘The Tower of Thanks.’ 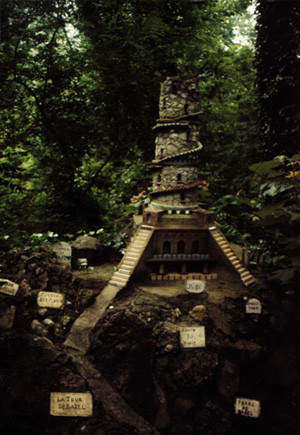 The Tower of Babel


It’s easy to dismiss a man who spent his free time building replicas of Bible scenes out of old ink bottles and rusty bird cages; still, Brother Joe’s work has a sense of unity and vision that most artists rarely achieve. The Grotto is part kitsch and part genius, and it’s hard to tell exactly which half of that equation draws the crowds. But for whatever reason, tens of thousands of people flock to St. Bernard’s every year: devout Catholics seeking inspiration, college kids looking for a good laugh, weary snowbirds stopping by on their way to the Florida Panhandle.

St. Bernard’s is located just outside of Cullman, a sleepy town halfway between Birmingham and Huntsville. The monastery, founded in 1891, has seen better days; once home to more than 100 monks and a four-year college, the number of brothers has dwindled to 50, and the college closed in 1979. Nevertheless, the Grotto is an obvious economic windfall for the monks: on top of a $5 admission fee, the gift shop does a swift business in postcards, T-shirts, two types of shot glasses, and even a commemorative spoon, with a tiny picture of Brother Joe’s tiny Lourdes Cathedral emblazoned on the end of its handle.

The Grotto occupies a wooded hillside off to the side of the abbey; a concrete path winds up and down a hillside and takes visitors through a roughly chronological tour of Brother Joe’s work. Some of the first sculptures encountered include a replica of Castle Trausnitz and St. Martin’s Church in his hometown of Landshut, Bavaria, as well as a shrine to St. Peter and the ‘Tower of Thanks,’ a tile-chip-bejeweled, four-foot spire topped with four green glass balls, which came from Ireland and were originally used as floats for fishing nets. 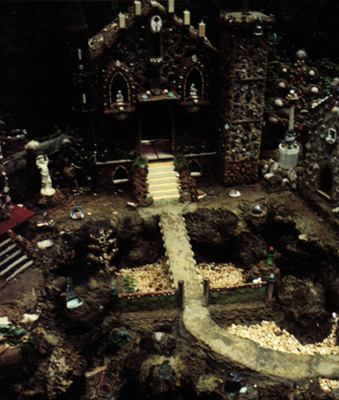 Hansel and Gretel Visit the Temple of the Fairies


The Grotto is easily the biggest tourist draw in the greater Cullman area, but it’s unlikely Brother Joe set out for fame when he started tinkering with spare cement and chunks of stone he found lying around the abbey’s physical plant. As a student Brother Joe had helped in the construction of the abbey buildings, during which time he suffered a back injury that left him permanently hunchbacked. Building replicas of religious sites was possibly a way for him to inure himself to his comrades; the original dozen or so sculptures were located in an abbey garden closed to the public, available ‘only for the enjoyment of his fellow monks,’ according to a guide to the Grotto.

But word of the collection spread to the lay community, and public interest soon drove the monks to move the replicas to their present site and open the Grotto to the public in 1934. By then the collection had grown several times, and Brother Joe continued adding to it until soon before his death. After World War II he built a memorial to St. Benedict College alums killed in battle—made, among other things, of colored marbles and shards of glass. He completed his last work, Lourdes Cathedral, in 1958. Along the way he built two main ‘groups’ of replicas—Jerusalem and Rome—as well as three artificial caves, including the Ave Maria Grotto itself.

Also interspersed among the replicas are several decidedly un-Catholic sculptures: ‘Hansel and Gretel Visit the Temple of the Fairies’ is a composite of childhood stories Brother Joe picked up in Bavaria and features a dragon made of bits of stone, marbles, and green tile. Brother Joe also built replicas of the Great Pyramid and the Hanging Gardens of Babylon, the latter complete with plastic toy elephants. 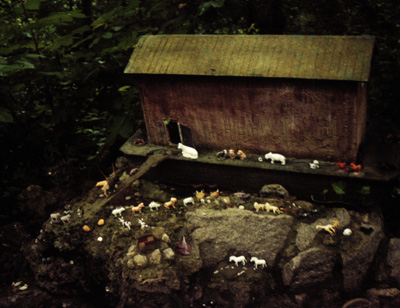 
According to ‘An Illustrated Self Guide of the Ave Maria Grotto’ by Rev. Aloysius Plaisance, OSB, Brother Joe never traveled, and except for the abbey facilities and those in Landshut he had never seen the buildings he modeled (which explains the wildly inaccurate scales of some of the models). Brother Joe worked solely from photographs, and his creativity, of course, which he used to fill in the blanks where the abbey library came up short. In fact, it’s Brother Joe’s intense imagination that sets the Ave Maria Grotto apart from the thousands of petting zoos and ‘hidden’ caves and other tourist traps that dot America’s highways—there’s more than a little brilliance in a man who appreciates a rusty bird cage not as garbage, but as the perfect base for a replica of the St. Peter’s Cathedral dome.

Nevertheless, in guidebooks and on websites, the Grotto is regarded primarily as another piece of kitschy Americana—innocently weird, motivated by a peculiar vision that few of us can understand but all of us can joke about. For some, visiting the Grotto is literally a religious experience, but for most it’s an opportunity to stretch their legs and get a good laugh. It’s hard not to; the Grotto is, above all, an intensely strange place, even while it is also a fantastic example of outsider art.

So if you go, go twice. Walk through the Grotto, chuckle at the cold cream jars, snicker at the plastic animals lined up outside Noah’s Ark. Then, when it’s all out of your system, go through it again. Notice how Brother Joe uses chunks of pumice in ‘St. Peter’s Shrine’ to suggest how Christ once showed a doubting Peter that, through faith, he too could walk on water. Notice just how detailed many of the miniatures are, down to the window panes and brickwork—and this from someone who received zero artistic training. Ask yourself whether Brother Joseph, had he chosen a different life path, could have ended up a renowned sculptor or architect.

And on your way out, don’t forget to buy a commemorative spoon.

All photos by Clay Risen