Low-rung employees at Saturday Night Live may not make Lorne’s salary, but they do get to hobnob with the weird and wonderful. Former page ALAN BAIRD looks back on the Belushi days. 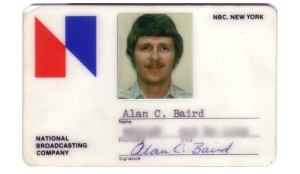 1) John Belushi grips my blue tie, which is still attached to my neck, and drags me down the hall to his Saturday Night Live dressing room. The Windsor slipknot cinches ever tighter, and my vision becomes fuzzy around the edges. Dressing for my shift this morning, I never guessed the tie could be so easily converted into a deadly weapon.

John wanted to share a joint with someone (anyone!), and I happened to be the closest warm body. ‘C’mon, Tommy-boy. Rehearsal is over, and your work here is finished. Let’s go get wasted.’

But when you’re the newest page on staff, and terrified of being caught, you try to make a show of resisting. At least when in public.

It’s a classic case of mistaken identity. Tom is usually assigned to the Studio 8H desk during the week leading up to a live show, answering phones, taking messages, dealing with the steady stream of celebrities and hangers-on. And everyone says I look a lot like Tom. So the last images I see, before blacking out, are the smiling faces of two fellow pages, receding into the distance as I’m towed away. Those same two faces, now hovering above me and filled with concern, are also the first things I see upon returning to consciousness.

‘No. He kept dragging until you turned blue and passed out. Why’d you resist?’

‘This is a cool job. I didn’t want to get canned.’

2) We’re a lucky group of pages: our boss is hosting a weekend getaway at her summer cottage in the Hamptons. My colleague Robyn has gone outside to try the secluded swimming cove, but nobody else wants to break away from our showbiz gossip-fest in the rec room, so I decide to keep her company and head for the beach a few minutes later. Robyn emerges from her first dip when I arrive. There’s no need to test the water; Robyn’s exposed left nipple announces that it’s quite chilly.

I’m not sure if she realizes the surf has tugged at her bikini top, so I gallantly offer my towel…after a short delay for gawking. She smirks up at me. Honi soit qui Malibu.

3) David Bowie and I manhandle his life-size plastic punching doll into the elevator. The next night, NBC’s costumers will bolt David into this rigid contraption so he can spin and wobble across the stage on live television, while lip-synching one of the songs that made him into the icon known as Ziggy Stardust.

For a second, I gaze into Bowie’s left eye and notice his famous blown pupil. ‘Why drag this all the way back to your hotel? The Props department could lock it up for you.’

He laughs. ‘Nothing personal, but if it goes missing, I can’t just buy another one down at the corner shop.’

I still look back on this comment as my best shot at the Melonhead Hall of Fame.

Nobody gives us a second glance as we struggle outside to the Plaza. The Thin White Duke and an anonymous melonhead are trying to stuff a six-foot-tall, brightly-colored punching doll into the back seat of a stretch limo, but New Yorkers, true to form, don’t even notice this singular tableau. David turns, to say thanks for the help. Polite guy. My brain is churning at light speed, searching for another bon mot.

So I bring out the big guns: ‘Break a leg!’ When David looks puzzled, I rush to explain: ‘Not now. Tomorrow night.’ He smiles and thanks me again.

Then his limousine is gone, and I’m left alone to compose my Hall of Fame acceptance speech.

4) Six of us are squeezed into the rented car, driving back from a glorious day at the shore. It’s very dark and very late; we all have sand in our sneakers. And salt on our lips. Especially Mindy.

Traffic is light on the Long Island Expressway, and somebody flips through several NYC radio stations, hoping to avoid the musical stylings of Billy Joel. When a few strange electronic notes ooze from the speakers, we all perk up. ‘Stop! Right there!’ At first, the exotic music seems cold and inhuman, as though composed by aliens. But we gradually fall under its spell, almost holding our breaths; nobody is willing to interfere, even slightly, with the unworldly sounds. We sigh when the song finally ends, nearly twenty minutes later. Our short silence is broken by a whisper: ‘What the hell was that?’ The deejay tells us (Tangerine Dream’s ‘Tangram’), and I spend the next ten years looking for a copy.

5) The Grateful Dead begin psyching themselves up to perform 20 minutes before air, and by the time we let the audience take their seats, clouds of marijuana smoke in the entry hall have reduced visibility to five or ten feet at best.

Then the red ‘On Air’ light starts blinking, and through the heavy double doors, I can hear SNL’s house band rip into the theme music. Don Pardo’s dulcet tones announce the Dead and their guest host. Later, I’ll go inside to watch some of the sketches that have survived dress rehearsal, and none of us will miss the two musical performances. But for now, I stand in the empty hallway, sucking up a few lungfuls of second-hand reefer. After an earlier rehearsal, Jerry Garcia gave me one of his plastic guitar picks, and I run a finger along its triangular shape, resting securely in my pocket. This little treasure will look mighty fine, pasted into the ol’ scrapbook.