Seven Steps to the Perfect Mix

We know it’s ill-advised to drop Blonde Redhead next to word jazz, but our mixes are still hopeless. Jennifer Conrad talks with Isaac Green of the StarTime International record label about putting together the best mix tape ever.

The perfect mix tape can turn you into a legend among your friends; it can make you revered for your impeccable and obscure taste. Or it could totally destroy your reputation: A poorly placed Leonard Cohen song can unwittingly unhinge a romantic blend.

Isaac Green, formerly responsible for ‘steps and shouts’ with St. Louis third-wavers Isaac Green and the Skalars, knows how to make a great mix tape. It might be this very ability that’s allowed him to successfully run the StarTime International label (French Kicks, the Walkmen, Northern State), which recently released Supercuts, a mix-tape-style compilation album culled from the best demos the label received over the past year.

So how do you make the perfect mix? Let’s ask Isaac. 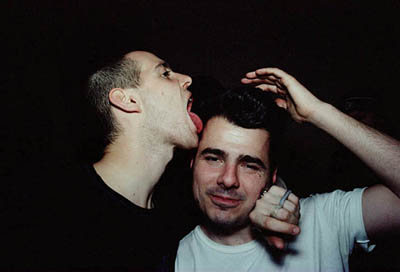 Isaac Green getting his hair licked by Mike Skinner (The Streets)

‘Everything was chosen because I felt like every song sounds good next to each other…It’s like when you’re at a club, with any DJ you probably forget what happened three songs back. You are most interested in what the next song will be and how it complements what you’ve just heard…With a great DJ, at some point every song the DJ picks sounds like the greatest choice, almost like the only choice, or something like that. That’s much too idealistic, but with a really great DJ somehow whatever they chose sounds better after they’ve chosen it, sort of like with a great chef. When they’re making a meal, in their hands something very mundane can be much more special.’

2. See your vision through.

‘People used to ask me jokingly, ‘Oh, how bad are your demos?’ I thought a lot of them were actually quite good. Every month or so I’d fish through my demos and listen to them again and enjoy listening to either the whole demo or a single song. I found this sort of remarkable quality of records that I couldn’t put out.

‘I took 22 of my favorite songs and just started putting them together and added and subtracted. When I started asking bands if they wanted to be on the compilation, some bands I couldn’t find or something would come up, and it just sort of made its way into the comp.

‘There were no criteria [for picking the songs]. I definitely wanted it not to be an anthropological document or a ‘this-is-the-scene-today’ kind of statement. I wanted it to be more relaxed, just more of songs that I liked and I thought other people would like…I didn’t want to have it be a retro kind of faux Nuggets-style set of songs.’

‘Even when I make compilations for my friends, I’ll make one or two before I finish it, so I’ll work on an order and listen to it and see if it feels right and then go back and redo it.’

4. Obsess over the details.

‘It’s definitely not front-loaded or anything like that. The whole idea was to order it so that each song was a good progression. I liked having the first four songs be fast, and then slowing it down. When I went to master the record at Sony, Vic Anesini and I worked very closely to make the record move in a very definitive sort of way.

‘[After the Realistics’ ‘Why Didn’t You Stay’], I definitely thought it was time to slow things down, and not make it an all-out sort of retro rave-up record, but instead say, well this is fun and then just kind of make it a little mellow. That’s when I had this great track [‘Hull’s Too Good For England’] by a band called Salako. What a great tool to have for your own CD. It’s such a pleasant, funny, clever song.

‘I love those opening chords in that Witnesses song [‘Everybody’] and I like how they sound after Ambulance Ltd. [‘Country Gentleman’]—that last ride cymbal crash, and then sort of jarring chords.

‘I was sitting with Jackie Gendel and Mike Reddy [of the band Team U.S.A] and Dawn Barger. I think they might be a tad more clever than I am, so I saw this great opportunity to get a funny name for the mix. Jackie came up with Supercuts, and when she said it, we all sort of decided she was the winner of the contest.’

6. Put it in a pretty package.

‘My best friend Ethan D’Ercole had this idea of this house party that the comp would be the soundtrack for and that’s why he has this picture of a party on the cover. When you take the CD out, the party has been busted by the police. It’s all layers of matte paper.’

7. Relax. Whatever the result, your family will still love you.

‘Trust me, the music is fantastic…I have great taste. And my brother really likes it.’