There are many adventures to be found off the beaten path, and some may involve minstrels. Former Peace Corps volunteer and sometime hero Matthew Baldwin recalls a day-long hike in Bolivia.


‘Sweeping The Dirt Floor’ is a series of stories taken from the Peace Corps journals of Matthew Baldwin.

It was my ninth week in Bolivia and I was ready for a challenge. I was still a Peace Corps trainee at that point, but I’d been sent to spend a few days in the company of an experienced volunteer and get a glimpse of my future living conditions.

Jay, the volunteer to whom I was assigned, was stationed in Sacaca, an isolated region of Bolivia located in a river valley and home to the nation’s most ancient communities. That suited me fine, because though some may envision the Peace Corps as a bunch of pacifist hippies—threading flowers into gun barrels and fixing the world with hugs—an undeniable strain of machismo runs through its ranks, and many volunteers eagerly embrace any opportunity to get as far off the beaten path as possible and brag about it later. By my reckoning, this site visit would be my first opportunity to prove my mettle, both to myself and in the eyes of an experienced volunteer. After two months of language seminars and technical workshops, I was eager for my first real adventure.

So when Jay asked if I wanted to accompany him on a daylong trek to visit his communities—and perhaps see some Incan ruins—I eagerly agreed. And as we began our descent into the valley, I was already writing the narrative in my head, one about two spry and youthful Peace Corps volunteers venturing into uncharted territory on a grueling hike that would test the limits of their endurance.

Two hours later I was sitting around with a bunch of guys and getting drunk.

When we approached the first community, intending to check on some greenhouses Jay had worked on, a group of jovial men toting old detergent bottles filled with alcohol lunged out of their homes and greeted us with alacrity. After enthusiastic Holas! all around they began talking with Jay.

After some length Jay turned to me and translated—my conversational Spanish not yet up to snuff—‘They want us to go drink chicha with them.’ I suppressed a shudder. Thick and potently alcoholic, chicha is derived from fermented corn and is the indigenous drink of northern Bolivia. We drank some during training, and I, along with most of my companions, found the stuff completely unpalatable, like drinking polenta steeped in rubbing alcohol.

‘At nine in the morning?’ I asked.

‘It did,’ Jay replied, ‘But out here they aren’t exactly slaves to the calendar.’

Faced with the prospect of throwing up in front of the volunteer I was trying to impress, I began cautiously backing away from the day’s first challenge. ‘I understand refusing to join these farmers for chicha might be considered rude,’ I proffered, ‘But we have a long hike ahead of us and should probably pass.’

Jay nodded and turned back to the farmer. The two spoke in Spanish for several minutes. Finally, the farmer smiled broadly, clapped Jay on the shoulder, and walked away.

‘It’s all settled,’ Jay told me. ‘We’re going to his house for one drink.’

Hours later, drinking chicha in the second household to lure us in, we mentioned the Incan ruins. A teenage boy in our company said he knew where the ruins were, and would be happy to take us there for a couple of coins. Jay was confident that he could find the ruins himself, but the boy insisted they would be impossible to locate without a knowledgeable guide. I don’t know whether we gave in or not, but by the time we left the house we had three boys and one drunk old man as companions.

After hiking the absurdly steep hillsides in the valley for a while, the fabled Incan site came into view, conveniently located adjacent to our trail, where we couldn’t possibly have missed it. The ruins were situated atop a peak, and while I was perfectly happy to gaze at them from the path, our guides clearly had other ideas. In a show of dexterity unseen outside of Spider-Man comic books, the quartet scrambled up the side of a near-vertical rock face and then sat grinning down at us, as if to say, ‘You paid us to take you here, Gringos—come on up.’

It was obvious that Jay wasn’t any wilder about this idea than I was, but neither of us wanted to back down in front of the other. So Jay slowly climbed the rock face, and I reluctantly followed. Several times I had to resist the urge to simply freeze up and take root like a lichen. By the time I reached the top I may not have been a better man, but I was certainly a sweatier one.

At the summit we saw stone walls, what may once have been a road, some caved-in tunnels, and a large bolder perched, for unfathomable reasons, on the edge of the peak. The bolder and the tunnels were unquestionably of Incan origin, but the road and the walls—the centerpieces of these ‘Incan ruins’—couldn’t have been constructed more than a century before. When Jay mentioned this to our guides, they shrugged their shoulders. ‘Old is old,’ one of the boys informed us.

Then the guides gestured to a narrow hole in the side of the mountain and inquired if we would like to descend into one of the caves for some impromptu spelunking. Thoroughly humbled by the terrifying climb up the peak, I proposed we just head back down. But at that moment Jay and I realized there was no obvious way down. We certainly couldn’t descend the sheer face we’d scaled on our way up, and there was no point along the ridge that didn’t end in an abrupt and lengthy drop to the valley below. When we pointed this out to our guides they said yes, they knew. The only way down, they told us, was through the cave. Asking if we wanted to go that way had only been a courtesy.

With that, the guides, one by one, disappeared into the hole. Only after the last one vanished did we realize we didn’t really know how they’d managed to navigate the tunnel. The first portion of the chute was a straight drop, and you either had to land on a tiny platform or tumble all the way to the bottom (which couldn’t even be seen because the tunnel twisted to the left). To successfully land on the platform you had to brace your arms on either side of the chute, lower yourself halfway down, do something, and then lower yourself the rest of the way down. The something was an unknown maneuver we couldn’t imagine until we attempted it, and couldn’t remember afterwards because of the duress it had been performed under.

After surviving the caves, Jay and I parted company with our guides and started up the canyon, heading home. We soon found ourselves between communities, surrounded by lush vegetation unmarred by homes or villages. Now free from distractions, I could again mentally narrate our adventures with myself as the protagonist. ‘Miles from civilization, the intrepid Peace Corps volunteer hikes up a remote and desolate stretch of river valley that no man has traveled in hundreds of years.’

That’s when we encountered a band of traveling minstrels. Eight slightly inebriated men carrying flutes and clad in traditional Bolivian garb rounded a bend in the river valley, spotted the two of us, and, without so much as a wave, launched into their set.

After treating us to a few tunes they chatted briefly with Jay, slapped us each on the back, and lurched away downstream. We started hiking again, and Jay related the conversation to me. The minstrels, it seems, were from a village upstream, and had somehow caught wind of a Carnival celebration in another community about six hours away. So they put on their livery and went off to join the festivities for a few days, bringing with them only coca leaves and instruments. No water, mind you, no food—they just struck out and trusted that other villagers and good fortune would take care of them.

I thought bitterly about the multiple jugs of water I’d been carrying around on my back all day and wondered why we hadn’t taken that approach.

We’d lost so much time—drinking chicha, exploring caves, and chatting with the minstrels—that we had to start hiking at a pretty good clip to ensure we would reach home by sundown. By then I was tired, but happy that things were beginning to conform to my original vision of this trip, of two rugged adventurers making the arduous journey in the remotest areas of the country.

But Jay soon admitted he wasn’t absolutely certain where we were. He knew we needed to keep going upstream, but wasn’t sure when we should begin our ascent out of the valley. We walked for a while longer, and then saw a woman and a young girl working in a potato patch by the river. Jay talked with the woman and discovered that she hailed from the first community we had visited—if we could get back there, we could find our way home. As they were done with their weeding for the day, she offered to lead us back. We gratefully accepted, and, a few minutes later, the four of us began hiking up the side of the river valley.

The woman was easily twice our age, but quickly pulled ahead of us and set a tortuous pace up the steep dirt trail. She didn’t seem particularly concerned that we struggling to keep up. Halfway up the slope, Jay and I were both thoroughly miserable.

I looked, and saw that this was not strictly true. She was wearing a sandal on her left foot—carrying the other, broken one in her hand.

Only the little girl, who must have been about seven, occasionally strayed back to check up on us. After we would assure her we were fine, just fine, she would run and catch up to her elder, effortlessly. The girl was not only barefoot, but also had a huge rip in the back of her pants. She was continually reaching around and holding the fabric together, even as she left us in the dust.

By the time we reached the top of the hillside, all Jay and I wanted to do was drop into the dust and rest. Instead, we trailed after the woman and the girl for another hour as they marched back to their community. A few cups of chicha later we said our goodbyes and staggered back home, broken.

We arrived at Jay’s house after sundown. I crawled into my sleeping bag and vowed never again to move in my entire life. 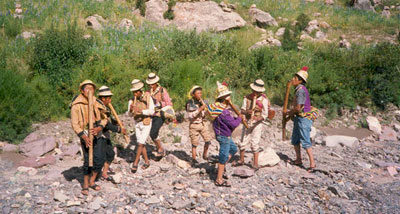