People who hate television love to talk about it, not realizing they could be spending their time improving their minds—with novelizations. The best of the oeuvre, with and without Steve Urkel.

I don’t own a television, and I never have. That’s not some fact I wave around, like a flag of self-righteousness. And if you own a television—and most people do—I don’t think that necessarily makes you stupid or lazy, or both. In fact, I praise your exercise of free will. I mean, if that’s how you imagined your life playing out, staring unblinkingly, the TV screen illuminating the grim lines of your expression, as you are lulled into a kind of corporate-mediated complacency while your dreams slowly calcify and die somewhere between the cushions of your couch, then good for you! I totally respect your choice; it’s just not the choice I’ve made. Because I don’t own a television. And I never have.

I do, however, own a vast collection of TV show novelizations, and have been a voracious reader of them since childhood. Novelizations take popular broadcast media and adapt it into episodic, novel form. They’re great for people like me, who love the written word and remain repulsed by television’s moral and intellectual bankruptcy. (Not that there’s anything wrong with television, for you.) Novelized TV also keeps me current enough on matters of popular “culture” to better relate to your average “Joe Total Fucking Idiot” as we’re gathered around the old office water cooler—me with my Terry Gross tea mug, him with his water bowl.

For those unfamiliar with the form, The Morning News suggested I share a round-up of some highlights from my substantial library. The editors have also asked that I provide some kind of quality-based review system for the curious and interested, so, in deference to you, I’ve employed a “TV viewer-friendly” review format, grading each series either “ME LIKE!” or “ME NO LIKE!”

I would argue this series of novellas, based on the adventures of the Wilson clan, a typical suburban African-American family, and their well-meaning but meddlesome neighbor, Steve Urkel, actually improves on its source material. Backstories are richer, characters are more nuanced and—as you’ll see in this excerpt from Volume #27: “Not My Robot!”—Urkel’s conflicted nature is finally rewarded with an appropriate level of humanity:

Mr. Wilson stared through the giant hole where his living room wall had been just moments earlier, then looked at Steve Urkel, who was still holding the large remote control to his out-of-control robot. “URKEL!!!” he screamed, shaking his fist in anger.

Urkel looked around at the mess and arched his eyebrows in surprise. “Did I do that???” he asked, knowing quite well that, yes, he had done that. 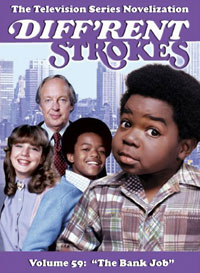 Sadly, this series, while expertly plotted, suffers from one of the most common and glaring mistakes in novelized TV writing: presumption. The author writes with the unsubstantiated expectation that readers are already intimate with the television series, its characters, and even the actors playing those characters. The result is both distracting and disappointing, I’m afraid. Judge for yourself, in this passage from “The Bank Job”:

…“Here’s your cash, kid. Have a nice day…and good luck, Romeo!” the bank teller said with a wink as she handed $40 to Gary Coleman.

Gary Coleman as Arnold closed his eyes and imagined all the various over-the-top ways he might spend his $40 on that evening’s hot date with Tootie, a character from the new spin-off television show, “The Facts of Life,” immediately following “Diff’rent Strokes.”

Suddenly, Arnold, who suffers from nephritis, a kidney disorder that impairs growth, was shaken out of his pleasant fantasy, quite literally, by his older brother, Todd Bridges.

“Gary Coleman! Gary Coleman! Snap out of it!” Willis cried, grabbing the fragile 27 year-old actor roughly by the shoulders. “This is the scene where the bank gets robbed!”

Before Arnold could reply with humorous skepticism, he felt the cold muzzle of a gun pressed directly against his famously ample cheek. It was a bank robber!

“You heard what Todd Bridges said, kid! This is a robbery. Now throw your all cash in the bag!” yelled Bank Robber no. 1.

With the prop gun still mashed hard against his face, Gary Coleman turned slowly to the camera, swallowed loudly to indicate fear, and stage-whispered, “Whatchoo talkin’ ‘bout, bank robber?” a troubled and poignant variation on his beloved catch phrase. And now a word from Ponderosa Steakhouse… 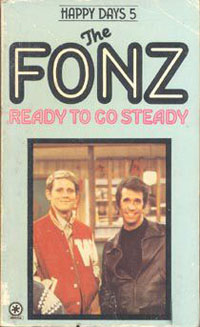 Spoiler alert! This is arguably the finest series of short books ever adapted from a popular television situation comedy. See how a simple exchange, surely played for laughs on its original television broadcast, becomes a long, meaningful gaze into the characters’ inner lives as the moment is re-imagined in printed form. From the novel, Ready to Go Steady, here is the much talked-about “hamburger scene”:

Arnold arrived at the table with a steaming tray of the gang’s favorite: hamburgers. The delicious hamburger aroma was so strong Richie Cunningham and his pals could practically taste them. And taste them they would!

“Don’t you mean ‘hamburger’?” Ralph Malph added, causing everyone else to explode in laughter.

Richie reached for a piping hot hamburger, but before he could sink his teeth into it, the Fonz burst out of the men’s room—his “office”—holding a greasy, rusted motorcycle carburetor. He snapped his fingers.

“Not so fast, Cunningham. I need you to run down to Pinkie Tuscadero’s Body Shop and pick something up for me.”

“Exactamundo, Red,” replied Fonzie. “And I need it now, because tonight I’ve got a very hot date with the D’Elvecchio triplets. Arnold, get Cunningham a doggie bag.”

“A doggie bag? But how’m I gonna keep my burger warm?” Richie wondered out loud, knowing he was pressing his luck.

“Why don’t you SIT ON IT?” snapped the Fonz, and everyone laughed.

Everyone except for Richie, who held his tongue, fuming. That’s me, he thought. Good old Richie Cunningham—the laughing stock of Milwaukee. Well, fuck you, Fonzie. You smug, manipulative, selfish bully. You think you’re so cool. I can’t wait for you to take a long, hard look in the mirror and see yourself for whom you really are. Not some eternally youthful teenaged rebel, but a middle-aged Jew, living alone in a tiny, one-room attic apartment, filling the gaping existential void in your life with cheap party tricks and night after morally bankrupt night of twisted, incestuous intercourse with underage girls nearly half your age. You’re in a hell, Arthur Fonzarelli, and you’re going to die in a hell, just like the rest of them! So, fuck you, The Fonz, and the same goes to all the other bullies in this world. You pricks and screwheads can’t keep pushing around Richie Cunningham. I am Richie Cunningham, God’s Lonely Man, and I will make each every one of you sit on it. Wait and see… I will make all of you SIT. ON. IT.

Does Richie Cunningham ever murder his friends and family? It’s a question the author leaves open, and one that compels us to continue reading, episode after episode, long after the televised version of this series has jumped the metaphorical—and, in this case, very real—shark.

Sure, these books have none of the blinking lights or swiftly moving computerized graphics that leave TV viewers agog, like apes discovering their newly engorged genitals for the first time. But this selection from Volume 32: “No Turning Back,” is pregnant with every bit of the drama, humanity, and harrowing dread that has made the companion show required viewing for the mass loners and shut-ins who regularly suck at the scabrous, poisoned teat of television.

Kenny knew the world was watching, and he was afraid. He wanted to turn around and go home. Hell, if he was going to be honest with himself, what he wanted most was to pull the shades, crawl into bed and never wake up again. But then he thought of his wife, Joleen, and their beautiful daughter, Rihannan. What was he going to say on that inevitable day when Rihannan came home from school and asked, “Daddy, what’s a coward?”

Kenny thought of his brother, Hambone, who was already serving his second tour in Baghdad, fighting an unwinnable war on foreign soil. Imagine if Hambone gave up just because he felt afraid? What if all our brave troops raised the white flag every time they experienced a little “fear factor”? What then?

Kenny suddenly understood what he had to do. For himself, for his family, and maybe even for America. “Let’s do this!” he shouted with courage in his heart, and placed the breathing tube in his mouth, as host Joe Rogan slowly lowered him into a 400-gallon tub filled with rhinoceros dicks.