The First Annual TMN Tournament of Books: Final Round!

Humiliating upsets, stunning defeats, the ever-surprising longevity of Tom Wolfe—it has all come down to this: the last match of the First Annual TMN Tournament of Books, sponsored by Powells.com. 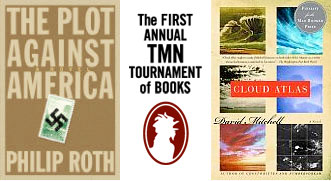 The judges have done their reading, the players are still in their corners. Our final round is a bout decided by all 14 judges who have participated so far, plus potential tie-breaker Jim Coudal. Each judge has one vote to cast. The novelist who receives the most votes of 15 wins.

Now, to the game:

On one side of the court, the great American novelist from Newark still hungry after all these years, eight-time winner of nearly every literary award offered by humanity (except the Nobel Prize, and the Rooster), a factory for readers and critics alike still churning out bestsellers from his bunker in Connecticut, the devil Saul Bellow sees in his nightmares, the man who gave Portnoys the world over a bad name, the one and only maybe-Zuckerman-maybe-not: Philip Roth and The Plot Against America.

And under the opposite goalpost, a young buck from the Atlantic’s fairer shores already showing Jordan-like talent, formerly of Japan and now of Ireland, winner of numerous U.K. awards no American’s ever heard of, muscle-bound, fast as the wind, and with an eye for the old man’s gizzard: David Mitchell and Cloud Atlas.

Who will take home the Rooster? Who will sputter and gasp and then collapse on the floorboards in a pool of their own cold fluids?

Click here for the final round of The First Annual TMN Tournament of Books, sponsored by Powells.com