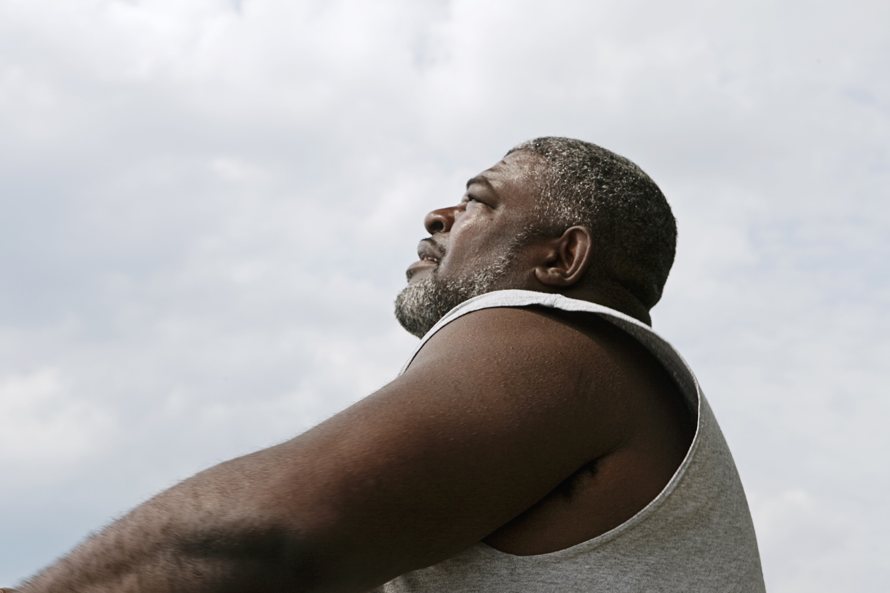 “Oliver, a recovering alcoholic 100 days sober, fishes at Hains Point, the convergence point of the Anacostia and Potomac Rivers.”

Portraits of community, recreation, and environmental abuse along the riverbanks of Washington, DC’s, Anacostia neighborhood.

Becky Harlan is a Tennessee-born documentary photographer currently based in Washington, DC. Harlan earned an MA in New Media Photojournalism from Corcoran College of Art + Design and a BA in Art History from Furman University. She is a winner in the 2013 PDN Photo Annual, and her work will appear in PDN’s June issue.

Photos from her project “Anaquash” are on view at the Corcoran Gallery of Art in Washington, DC, as part of NEXT at the Corcoran, an annual showcase of thesis work by graduating students. The exhibition is on display through May 19, 2013.

Images used with permission. Copyright © the artist, all rights reserved. 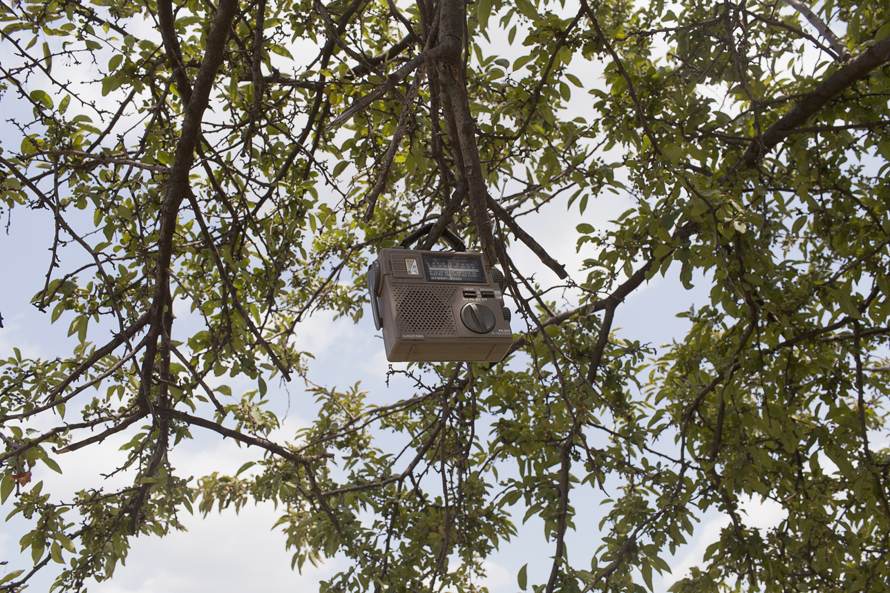 “The radio is alive and well on the banks of the Anacostia. Many fishermen bring along a radio to accompany them. Anything from gospel to rap can be heard emanating from the speakers.” 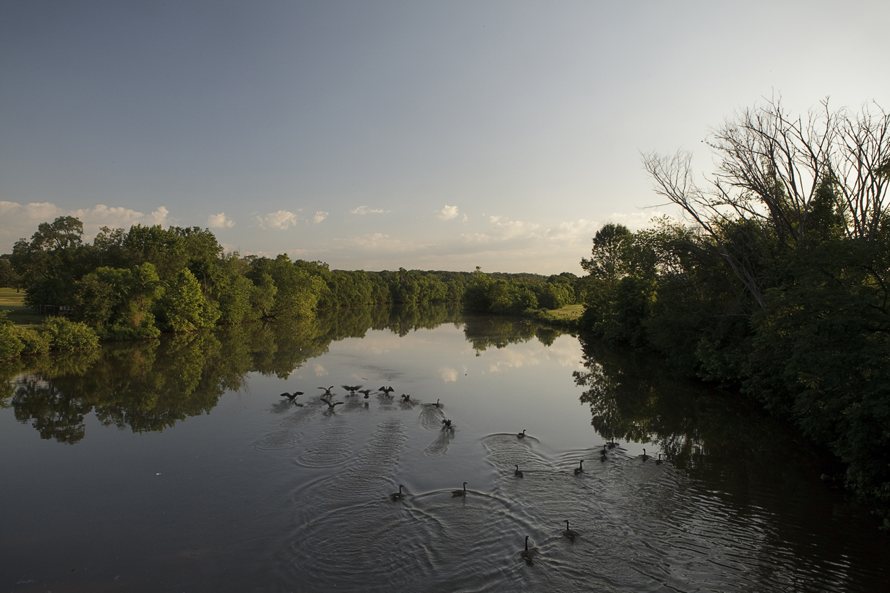 “Canada Geese travel upstream near Langston Golf Course. The grass provides the perfect place for the birds to graze. Though they should migrate, many of the geese stay in DC year round.” 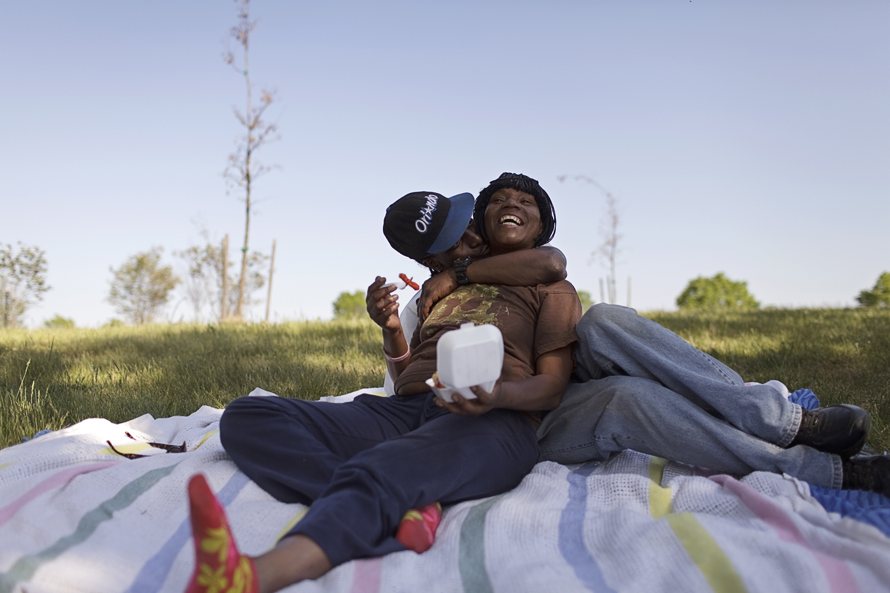 “Kay Halfacre and her husband Boo enjoy the sunny afternoon on the banks of the Anacostia River, April 2012. The day before, their family caught a 60-lb catfish in the same spot. Everyone was still excited from the epic catch.” 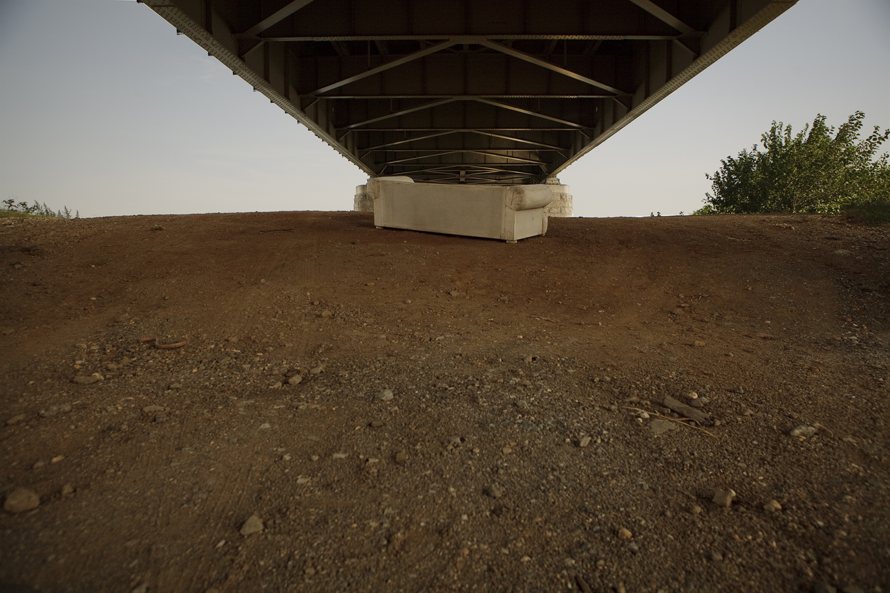 “An abandoned couch sits under the Frederick Douglass Bridge, east of the river, just across the water from Nationals Stadium. There is a growing gap between development and neglected space in many parts of southeast.” 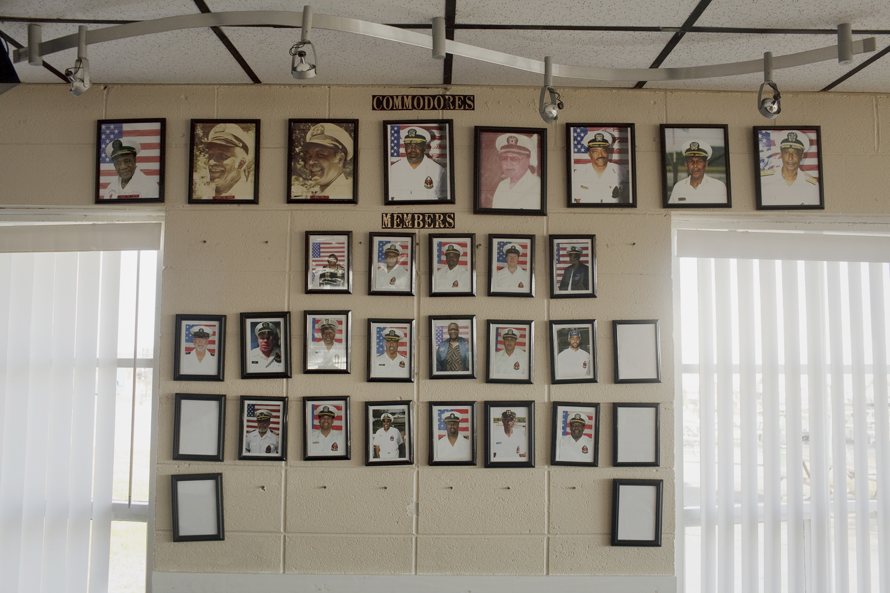 “The Seafarers Yacht Club was organized in 1945 and was the first black yacht club on the east coast. An active club, they started the annual Anacostia River clean-up day, and they frequently hold fish fries and other parties.” 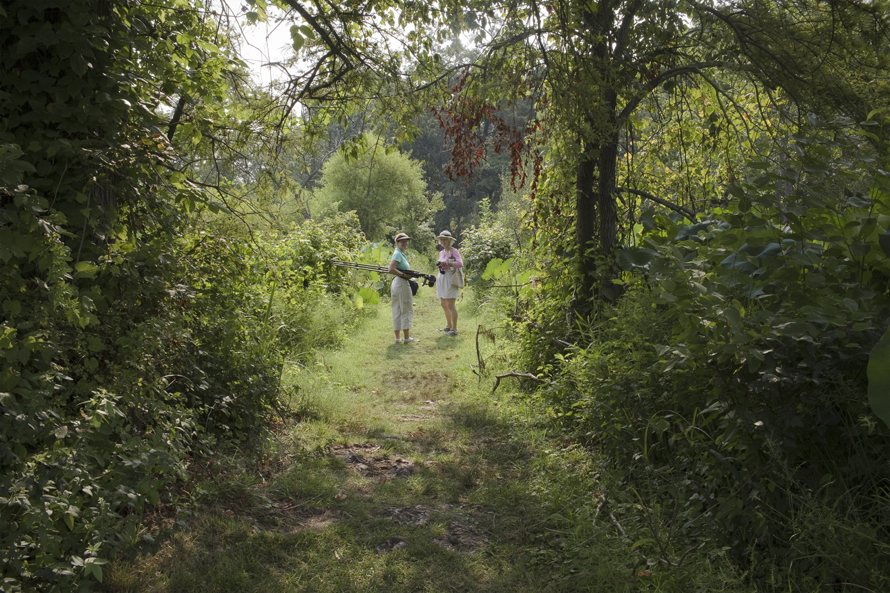 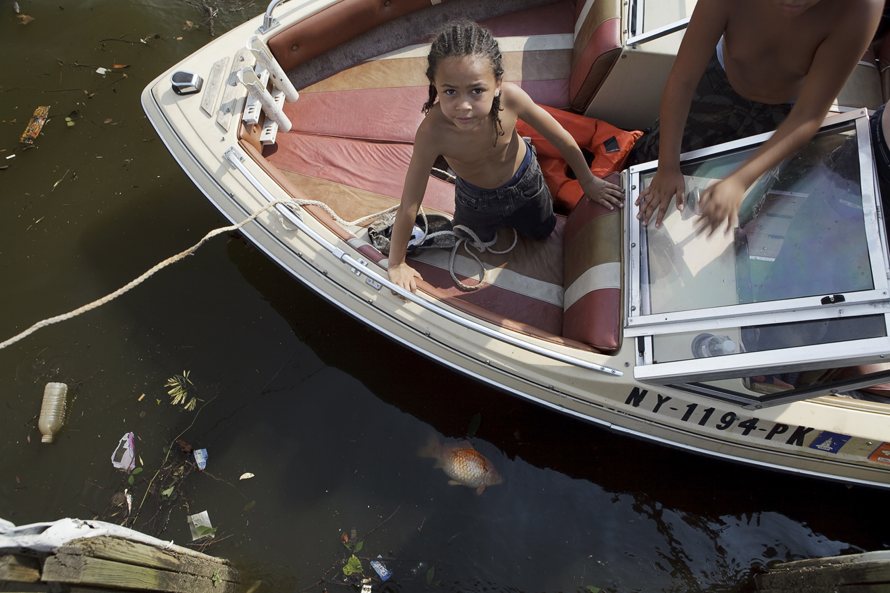 “Patrick is one of the few white men to hang out at the ‘Learning Tree,’ a popular fishing spot in Anacostia Park. His nickname there is ‘Light Skin.’ Here, his nephew rides on a boat that the family decided to fix up for recreation.” 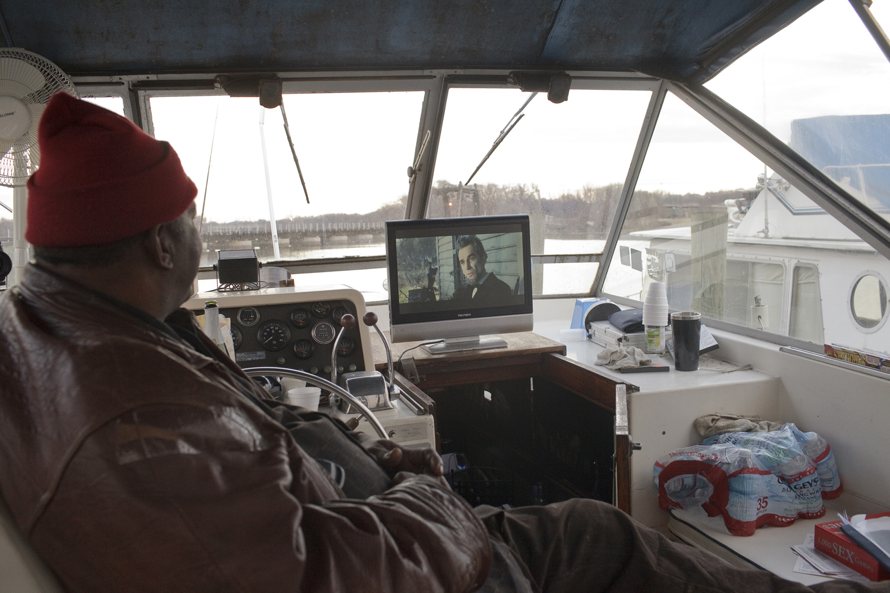 “AJ watches the film Lincoln, while he waits to catch a fish off of his boat, which is docked at Seafarers Yacht Club. The tide was too low to go out on the water, and he did not catch a fish until it came in.” 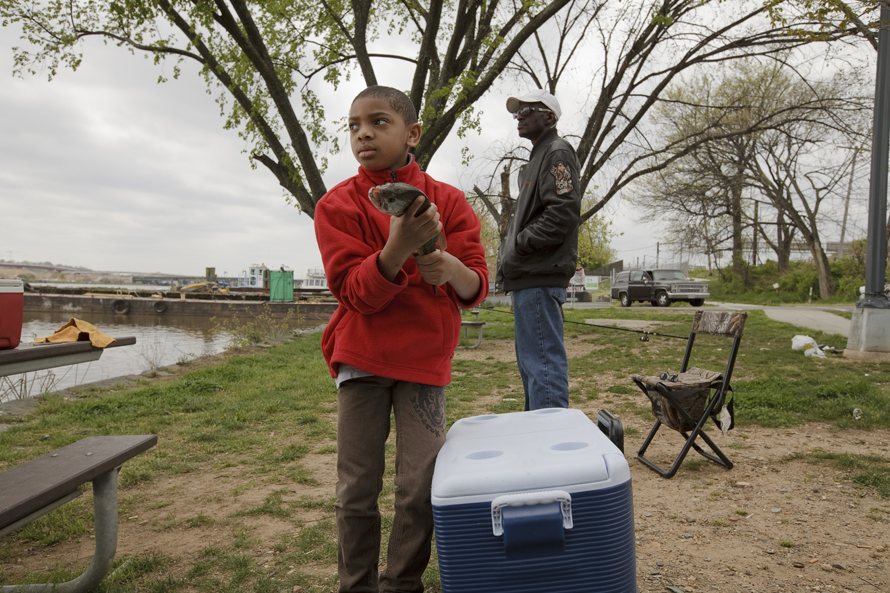 “Elijah holds a caught fish just south of the John Philip Sousa Bridge on a Sunday afternoon in April. The fish that his dad and his friends caught fascinated him.” 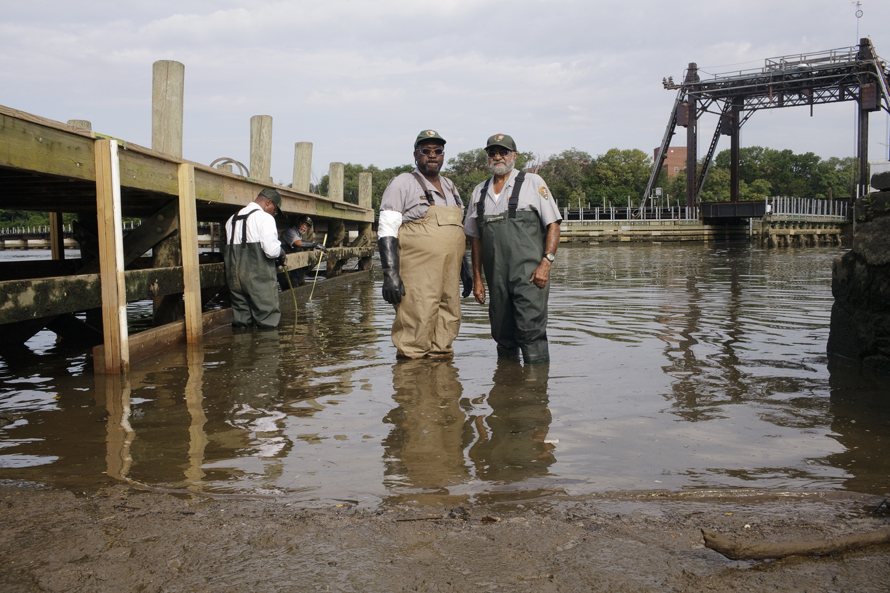 Your project statement describes the people along the Anacostia River as “ever-changing.” How has the community evolved?

The Anacostia neighborhood—“East of the River”—used to be a suburb of DC called Uniontown. In the 1800s there was a restrictive covenant that prevented African-Americans from purchasing land there. Frederick Douglass broke that in the 1870s by purchasing the home of the developer of Uniontown. African-Americans started buying up land in Barry Farms, just north of Anacostia, and it became an attractive area for them to relocate to. In the late 1950s whites began moving out of Anacostia to the suburbs; highways were created; and East of the River neighborhoods became very segregated areas, separated from the rest of DC by the river. Anacostia is something like 95 percent African-American, whereas the rest of DC is about 50 percent African-American.

Now, though, East of the River communities are being developed and the costs of living there are rising, so there is fear that long-time residents won’t be able to stay. Rapid development has already begun on the west banks of the river in neighborhoods like Capitol Hill and especially the Navy Yard.

Some areas around the river feel almost rural—the vegetation, the pace of life. It’s these little pockets that interest me most. I met people who have lived in DC for decades, people who were born here and whose grandparents taught them to fish here. Real estate is already extraordinarily expensive in DC, and even in the most “affordable” areas, rent is still outrageous. Some of the yacht clubs on the west of the river have been there for over 50 years, but they can only hope to hold on to their land with rising property taxes and the looming threat of the city seizing land through eminent domain. I will be surprised if they are here in 10 years.

I hope families aren’t pushed out of neighborhoods around the river. It would be a huge loss if it were no longer possible for DC’s longtime residents—people who have lived through the city’s history, from the race riots to the inauguration of the first African-American president—to stay. At the same time, it’s nice that restaurants, grocery stores, and arts organizations are popping up in once overlooked areas. It would just be ideal if it doesn’t totally shift the existing demographic.

Describe your first encounter with the river.

I heard about the river before I saw it. I was looking for a story for a grad school class, so I called up the Sierra Club and asked, “What’s a local environmental issue I could do a documentary about?” One of the first things Irv Sheffey said was “people subsistence fishing out of the Anacostia.” I decided to go check it out, but even with serious pre-visit Google mapping, I couldn’t figure out how to get to the river. I parked near a metro and just started walking. I was totally lost for over an hour. I asked people at a nearby McDonald’s for directions, and they looked at me like I was crazy. They had no idea how to get down to the shore. The area is so built up with highways that it took me a long time to find a section of the river where I could actually get to the water.

Finally I found a man fishing. His name was Mr. Fletcher, and he told me that he fished nearly every day. I was so frazzled I didn’t get his contact information, and for the next year and a half that I was working on the project, I always hoped I would see him again. I never did.

What is the trickiest part about telling this community’s stories?

The hardest part of this project is that I don’t really “belong” in this community. I am not a native Washingtonian, I’m 25, and I’m white. I didn’t want to come into this project acting like I knew something about this area or its people, but I did think it was a story worth exploring. I experienced self-consciousness about being an outsider, but that’s just a part of documentary work that I guess you have to get used to. The people I met were amazing—so generous with their stories and time. There is much stigma around this river that carries over to the communities around it, but it is largely undeserved. Sure the river is polluted, but a lot of it comes from industry that no one living there asked for.

What trait do you most admire in your fellow Washingtonians?

Energy. Everybody here is on a mission, and though it can be tiring, I think it gives the city a kind of vibration. You know things are happening here.

Any photographer who particularly inspires you at the moment?

I am definitely inspired by some of the classic photographers: Mary Ellen Mark’s connection with her subjects, William Eggleston’s use of color, and Tina Barney’s play between reality and theatrics. I really love tableaux photography—I feel inspired to capture something of that theatrical quality in reality. More than anything, though, the people I work with everyday challenge me. I draw a lot of inspiration from my classmates and people I’ve met at workshops.