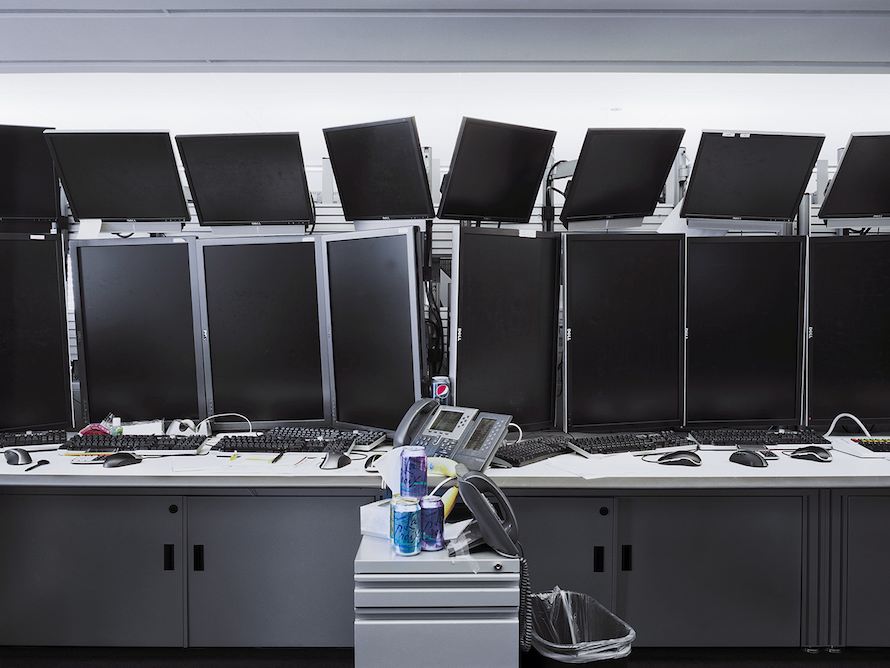 In their new book Volatile Smile, Beate Geissler and Oliver Sann examine the offices of trading companies in Chicago.

Also included are portraits of gamers at the very moment they kill an opponent. The parallels are disturbing.

Beate Geissler and Oliver Sann have been active as a collaborative partnership since 1996. Geissler and Sann were born in Germany and live and work in Chicago. Beate Geissler received an MFA from the Hochschule für Gestaltung in Karlsruhe, Germany. Oliver Sann received his MFA from the Academy of Media Arts in Cologne, Germany. Their work has been exhibited nationally and internationally in museums, galleries and alternative spaces including The Renaissance Society, Chicago, The Museum of Contemporary Photography, Chicago, the NGBK (New Society for Visual Arts) Berlin, the Fotomuseum Antwerp, Museum Ludwig, Köln and the Fotomuseum Winthertur in Switzerland.

Geissler/Sann have been the recipients of a number of prestigious grants and awards: the Videonale Award, Museum of Art, Bonn, Germany; Herman-Claasen-Award Cologne, Germany; the Dean’s Research Prize, School of Art and Design, University of Illinois at Chicago, and more recently, grants from the Elisabeth Cheney Foundation and the Graham Foundation, Chicago. Currently, Geissler is an Assistant Professor of Art at the University of Illinois at Chicago and Sann is Visiting Artist at the School of the Art Institute, Chicago.

All images used with permission, all rights reserved, copyright © Geissler/Sann. 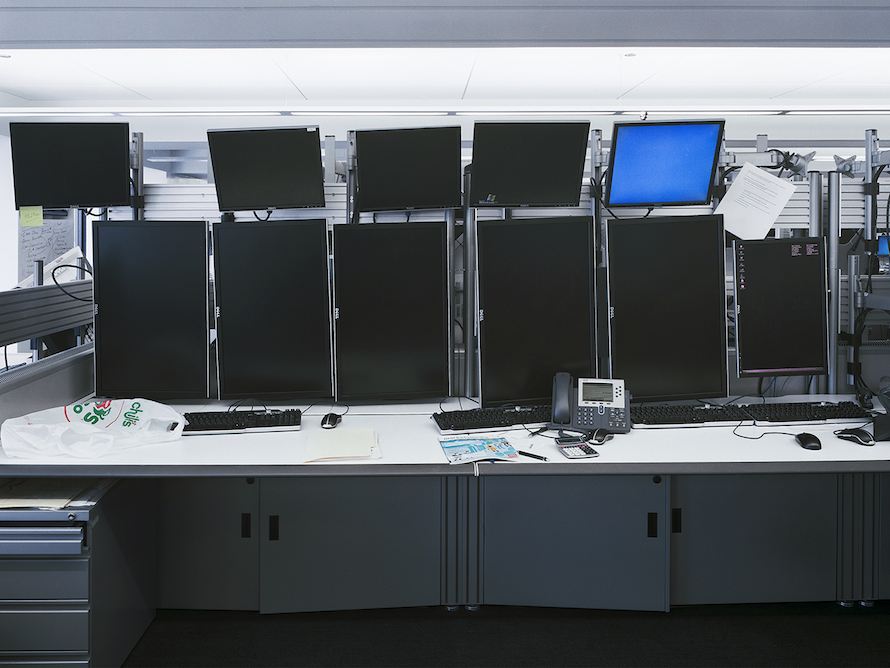 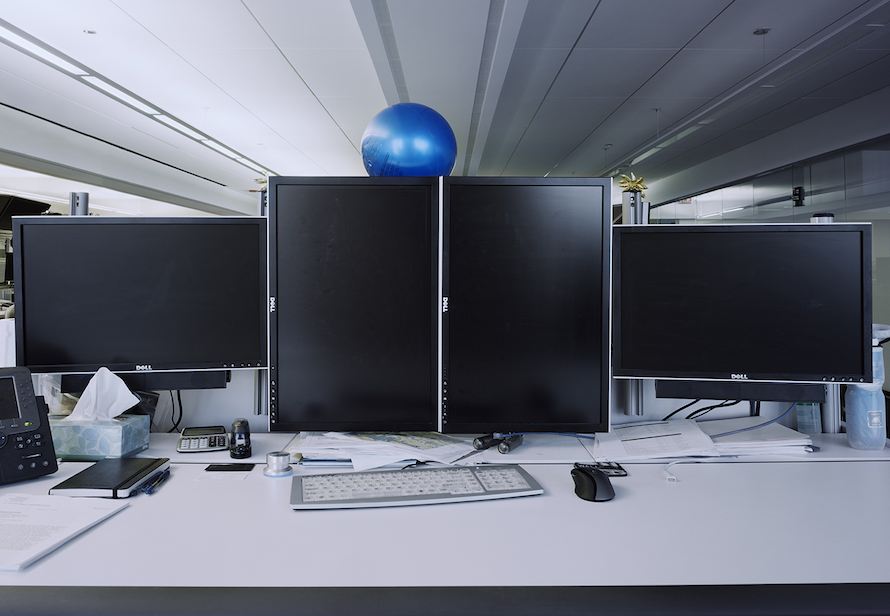 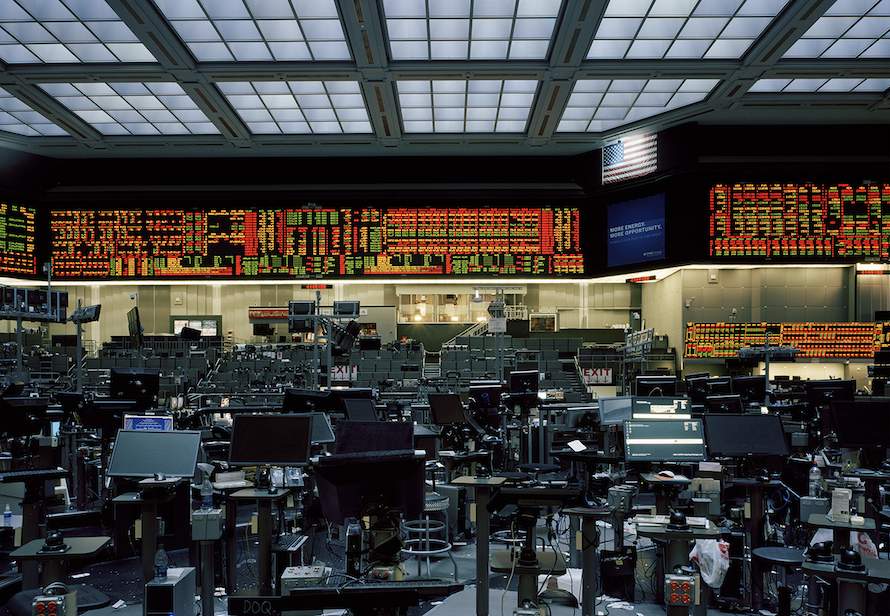 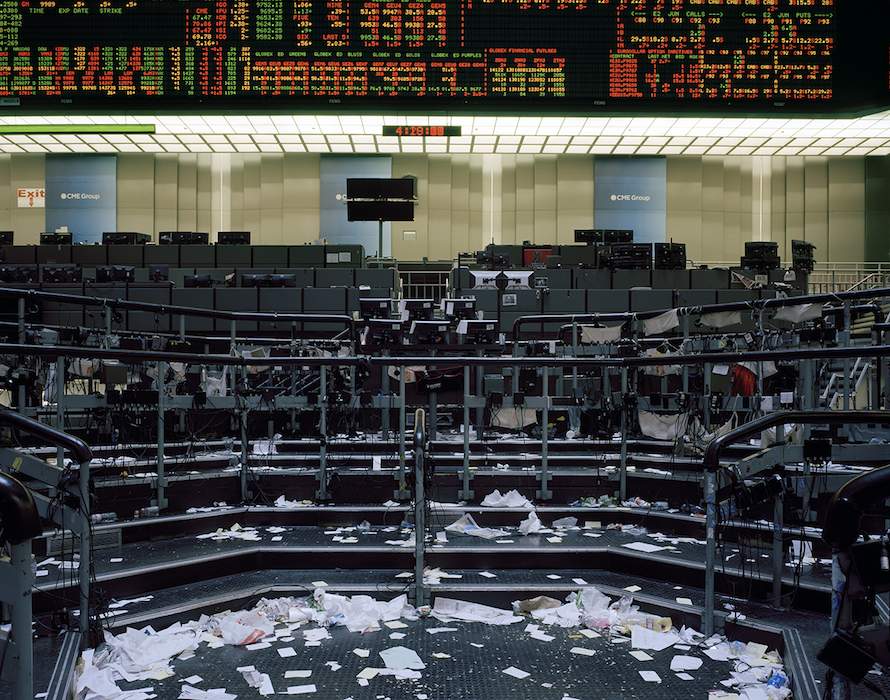 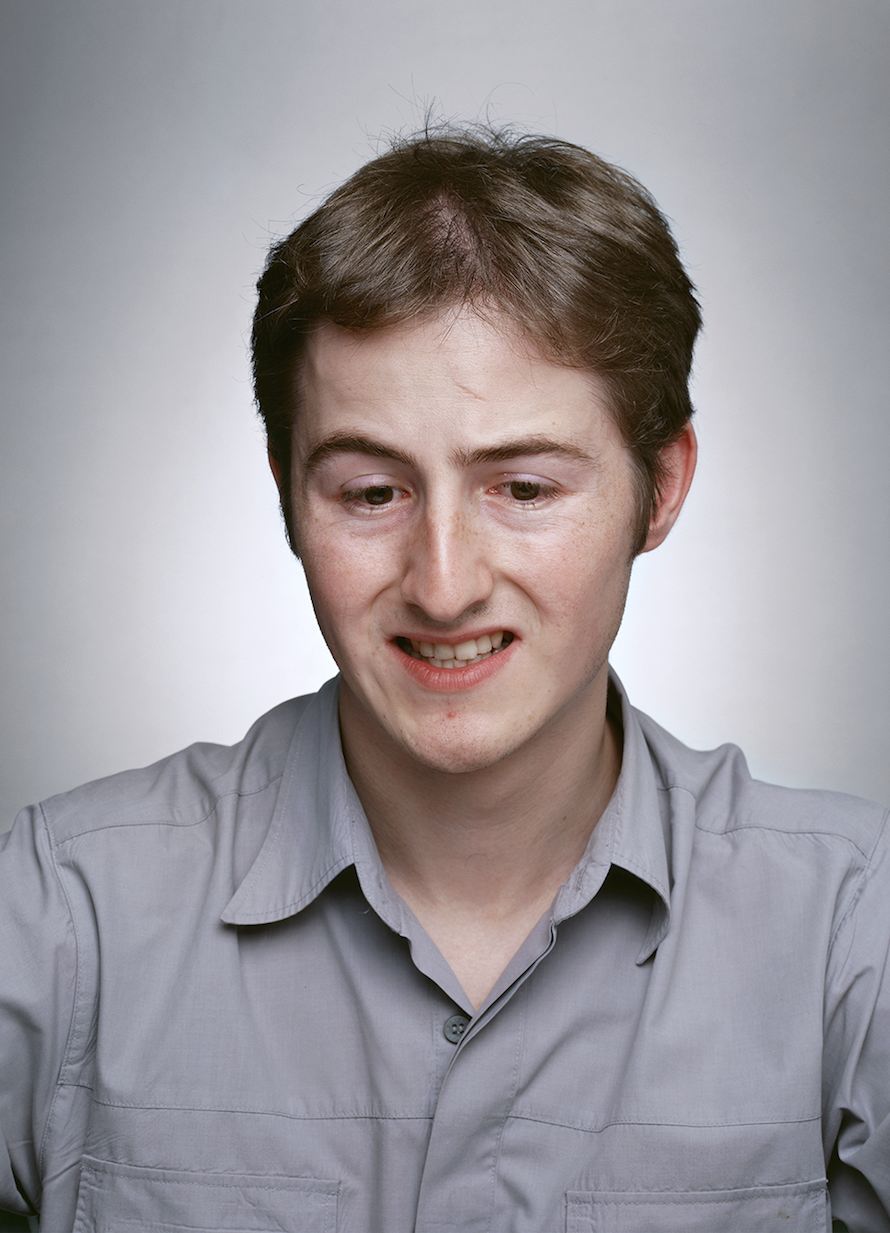 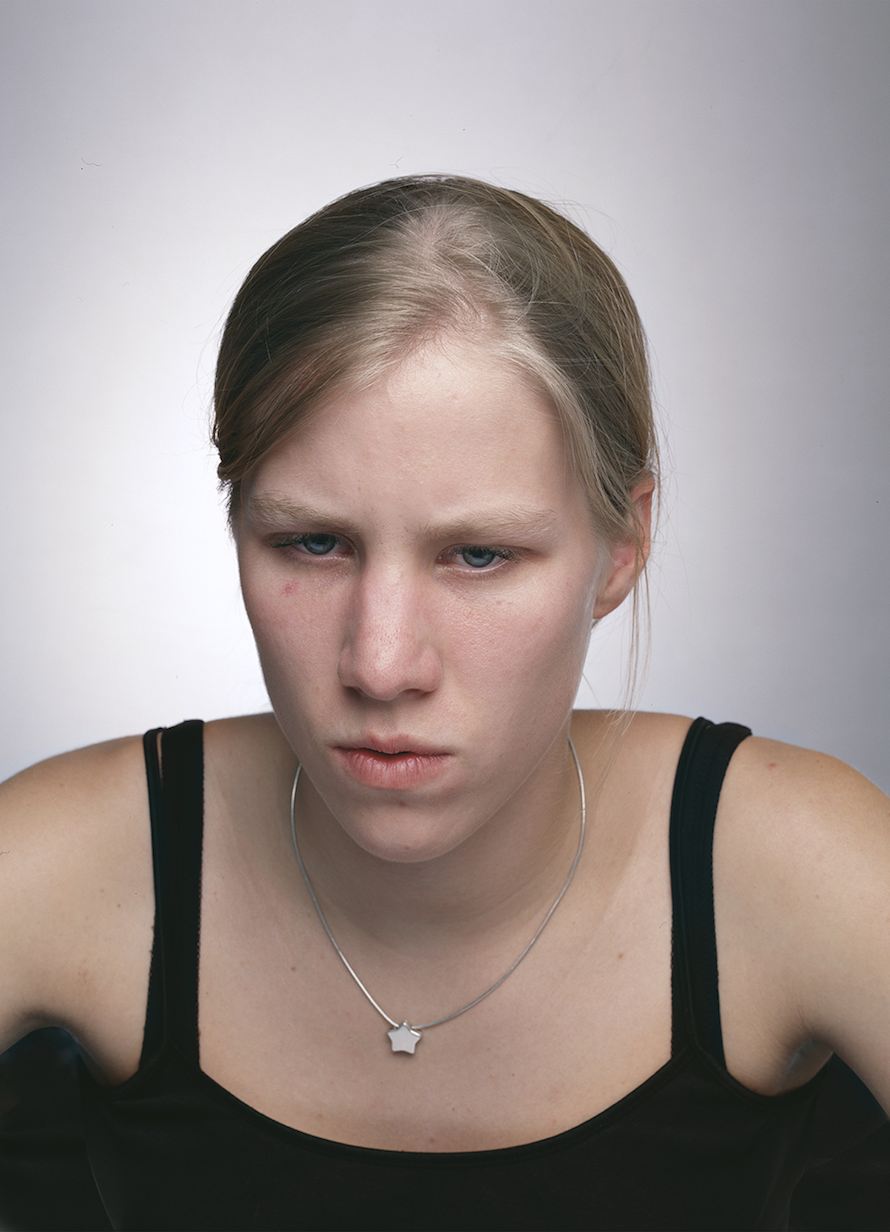 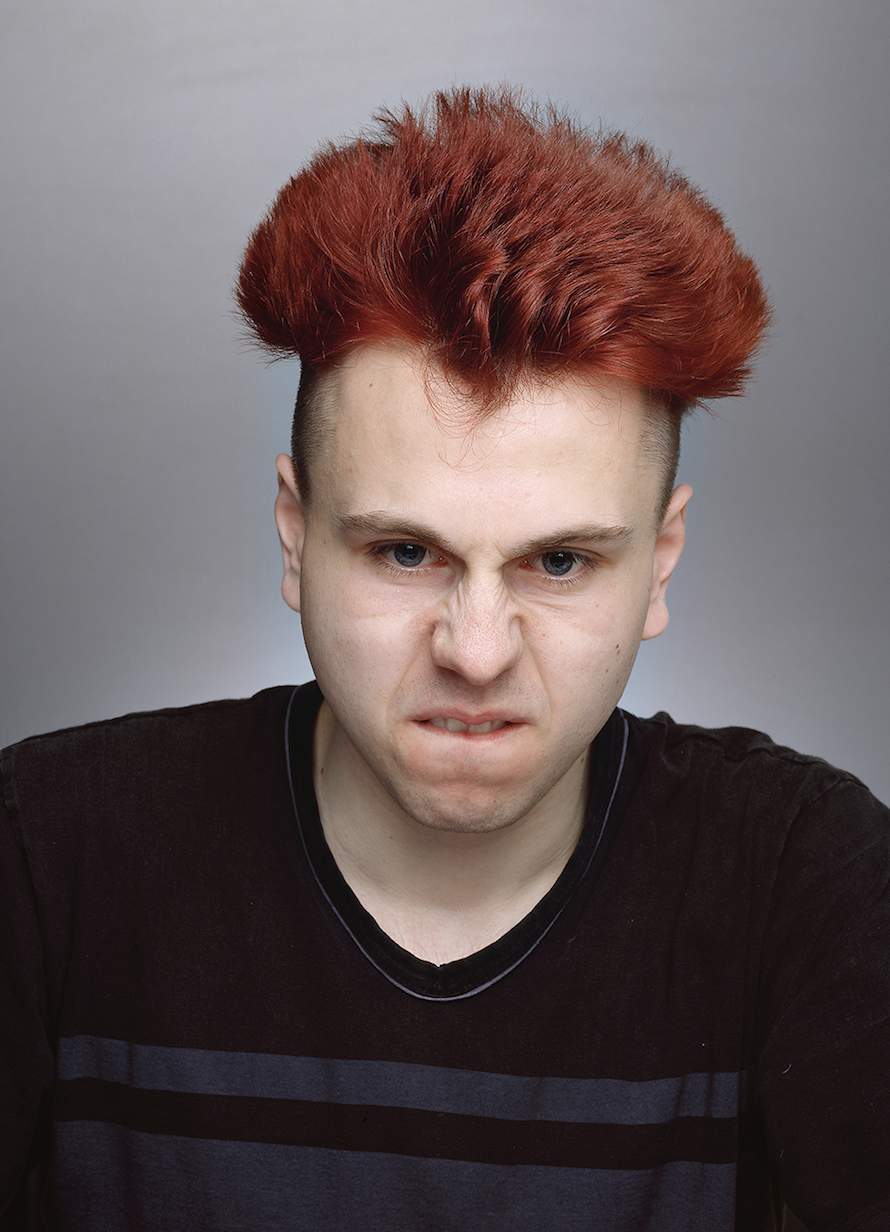 We never see trading desks or floors where the screens aren’t all humming with activity. What made you want to capture them asleep?

When we started our research on the conditions and the predicaments of capital markets, the financial industry, and trading in 2009 in Chicago, we realized that all those companies involved in electronic trading have installed incredible security measurements and deal with a lot of paranoid proprietary angst.

There was no way for us to take pictures with the screens displaying actual information. The traders’ predominantly female partners, for example, have to sign a confidentiality agreement or NDA (Non-Disclosure Agreement) before they are even allowed to enter their spouses’ workplace on the trading floor. Next to the fastest data line, knowledge, software, and algorithms are capital. So, we realized that those black screens are what we are allowed and therefore supposed to show.

These images represent a true dystopia for the trader. It’s the horror vacui of any trading company. The empty screen is what historically is called a ‘black screen,’ when the cathode ray tube from the ’80s didn’t show any trades and the lines moved up and from the screen.

Later in our research on the project, Karin Knorr Cetina, who’s one of the authors of the book wrote, “The screens project the market, but in the future that market might carry on just as well without screens. The contextual information will be necessary and will remain available—available to programs which receive and decode it without displaying it on a screen. The scopic regime under which electronic financial markets operate right now could simply migrate underground completely.”

What does “Volatile Smile” mean?

The title Volatile Smile is derived from the term “volatility smile,” which in the financial industry is used in the analysis of investments. It’s the graphical shape of a person smiling, and it results from plotting the strike price and implied volatility of a group of options at the same time. The higher the volatility, the riskier the security. Volatility modeling is what financial programmers and traders are occupied with in order to make usage of a quickly changing market. High-frequency trading therefore is often most profitable during periods of high market volatility.

We couldn’t help but connect the term with the expression in a face of a first-person-shooter gamer we took a picture of in 2001, who smiled at our camera in the most incomprehensible way in the moment he was killing his opponent in the game. We decided to make a connection between the history of those early gamers and today’s traders in order to describe this computer-mediated, post-social face-to-screen relationship.

Is an empty trading room a human place or a mechanical place?

It’s neither and both. But it’s also a technological and a natural space in which the environment becomes interface. It’s not in front of but from within technology these images were taken.

How about Chicago? It’s long been a financial hub. At the same time, it was hit hard by the recession and the mortgage crisis. Ta-Nehisi Coates recently pointed out in his Atlantic article, “The Case for Reparations,” it’s also been a place where “mortgages were effectively not available to black people.” Are people in Chicago any more or less connected to the systems of money?

Your quote seems absolutely true. Chicago is very segregated and big divides are running through this city. There is no doubt that the credit and financial markets in general are divided by race—but not only in Chicago. I think Chicago, in a sense, also allows this to be addressed, but it seems applicable to the entire US. Before 2008, though, it wasn’t about denying people mortgages. It was about the opposite. Banks were relentlessly handing out rather risky credit, simply in order to satisfy Wall Street’s appetite for those bundled products—only in order for companies secretly to bet money on the assumption that the very financial product they’d aggressively pushed into the market and sold to their customers in 2006 would actually fail.

But this seems far away today in 2014. In the US, in June 2013, the Standard Poor’s/Case-Shiller home price index showed that the real estate market was rising again at its fastest level in seven years, and back was “consumer confidence.” We have come full circle and yet this isn’t just supposedly a natural course of a boom-and-bust curve. Consumer spending rose apparently by 16 percent among Americans earning more than $90,000 a year; among all other Americans, spending was completely flat. By race, whites are three times more likely to reach affluence than everyone else and thriving markets appear to be driven by the affluent, not by the masses. The rich and well educated have put the recession behind them.

Here’s a quote from yet another Atlantic article for you, which, under the title “Can the Middle Class Be Saved,” shows a picture of a white, hetero-normative family in front of a mini-van: “In October 2005, three Citigroup analysts released a report describing the pattern of growth in the US economy: ‘To really understand the future of the economy and the stock market,’ they wrote, ‘we first need to recognize that there is “no such animal as the US consumer,” and that concepts such as “average” consumer debt and “average” consumer spending are highly misleading. [...] In fact, they said, America was composed of two distinct groups: the rich and the rest. And for the purposes of investment decisions, the second group didn’t matter; tracking its spending habits or worrying over its savings rate was a waste of time.”

Back to the faces you mentioned from “Shooter”—how do they connect to the world of computer-based trading?

It’s a trajectory within a generation, ultimately. When we organized LAN parties around 2000 and took those images, we first encountered a generation of predominantly white male human beings (98 percent in first-person-shooter gaming in 2001), many of whom are working in finance today. The first time we ever set foot on a modern high-frequency trading floor we were both struck by the semblance of our experience to the LAN Parties in 2000. It was a strikingly similar experience to the tension during the first-person shooter battles and a systemic game character, prevalent in both occupations once again caught up with us.

What keeps you coming back to computer culture as a source of inspiration?

For us, our human relation to technology—no matter what culture from—in all its endless forms—is a manifestation of social and cultural intention and power in the anthropocene and therefore the most compelling ground for all political negotiations. To speculate about the future is our mode of cognition. The challenges we face in the present pertain to inner alliances of knowledge and power, and their deep links in global culture/economy show the escalation in and transformation of human beings through technology.