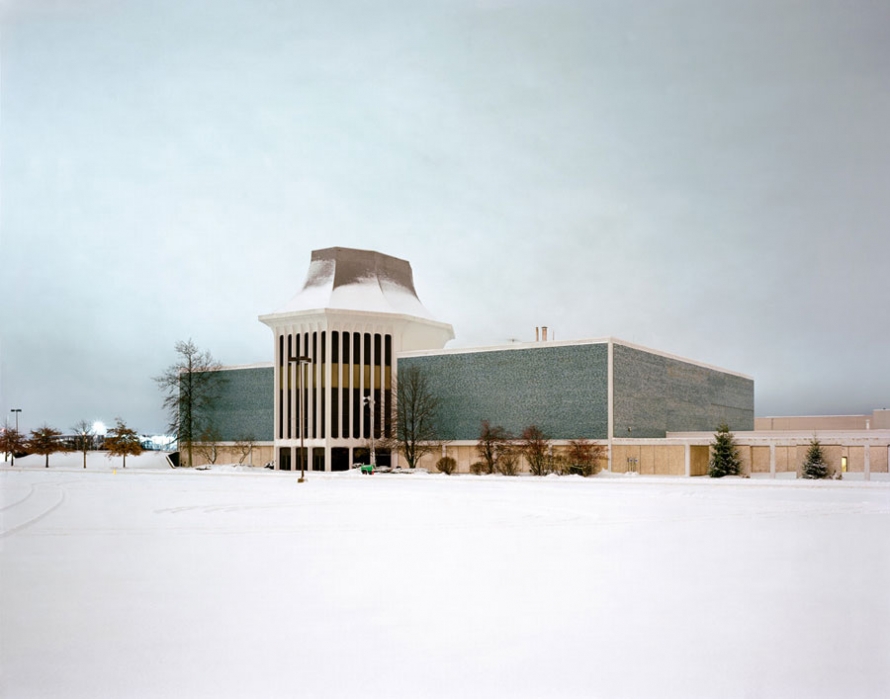 Landscaping overgrows, walls develop mildew, ceilings cave in—a building can be shut down, but that doesn’t make it go away. Brian Ulrich’s photographs of closed-down malls and big-box retail stores reveal the potential ghost towns lying inside successful shopping complexes all across America.

All images used with permission, all rights reserved, copyright © the artist. 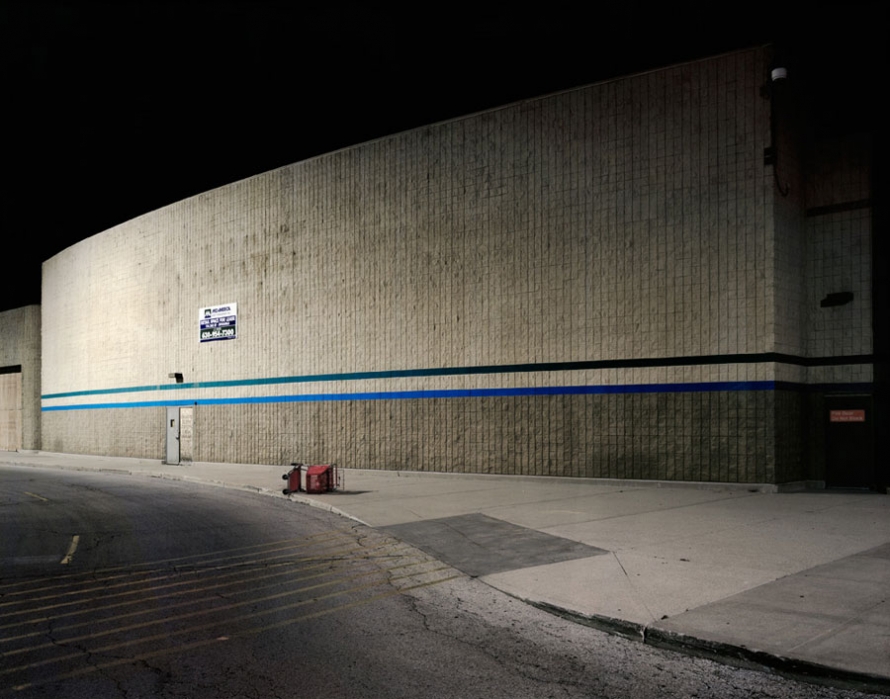 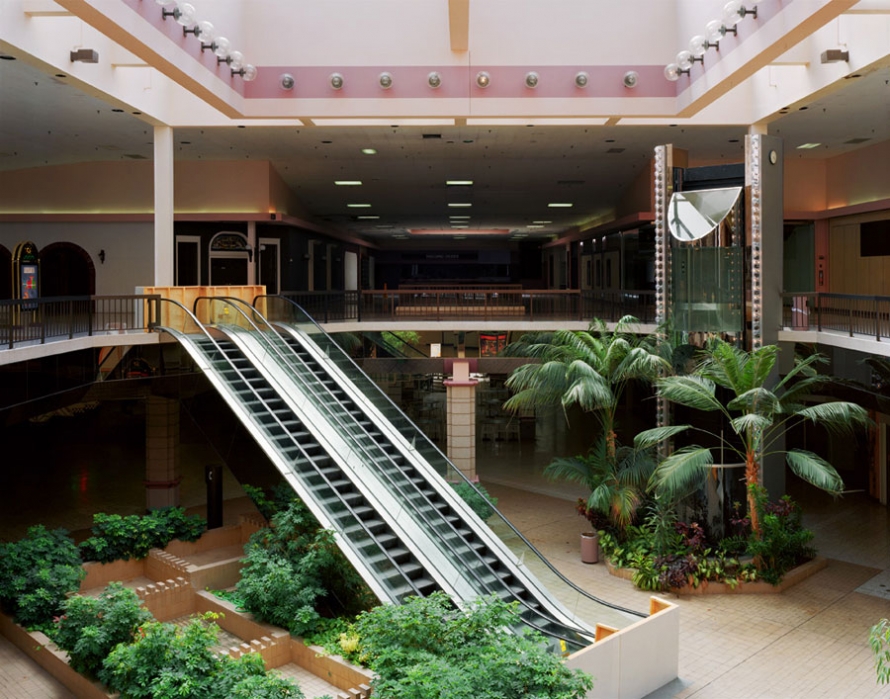 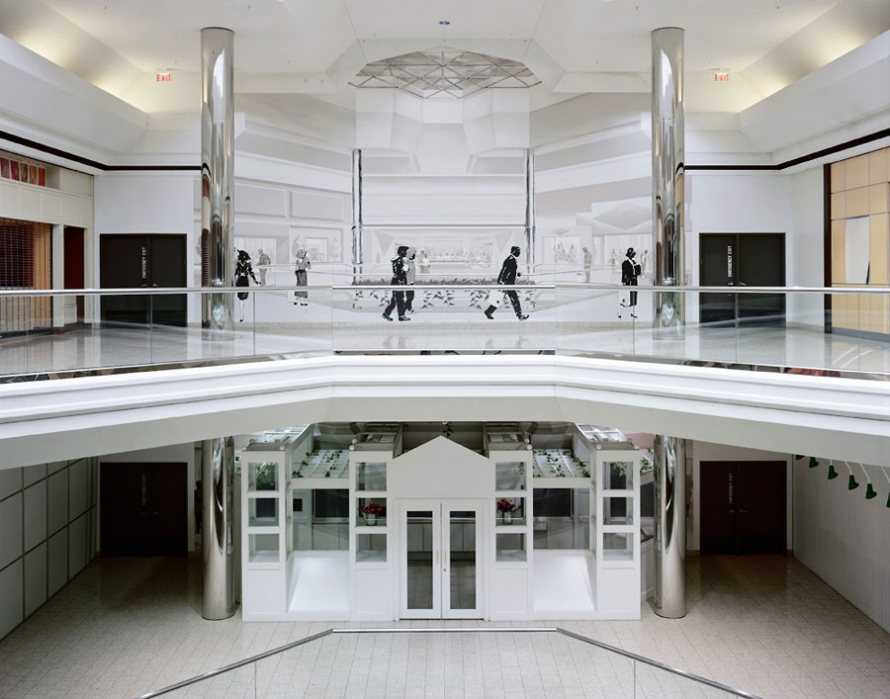 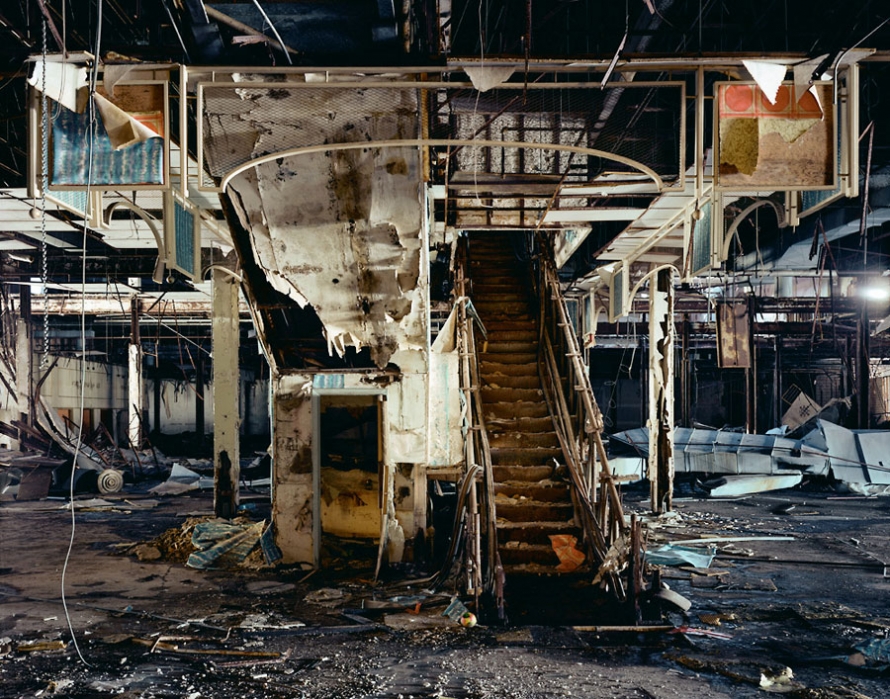 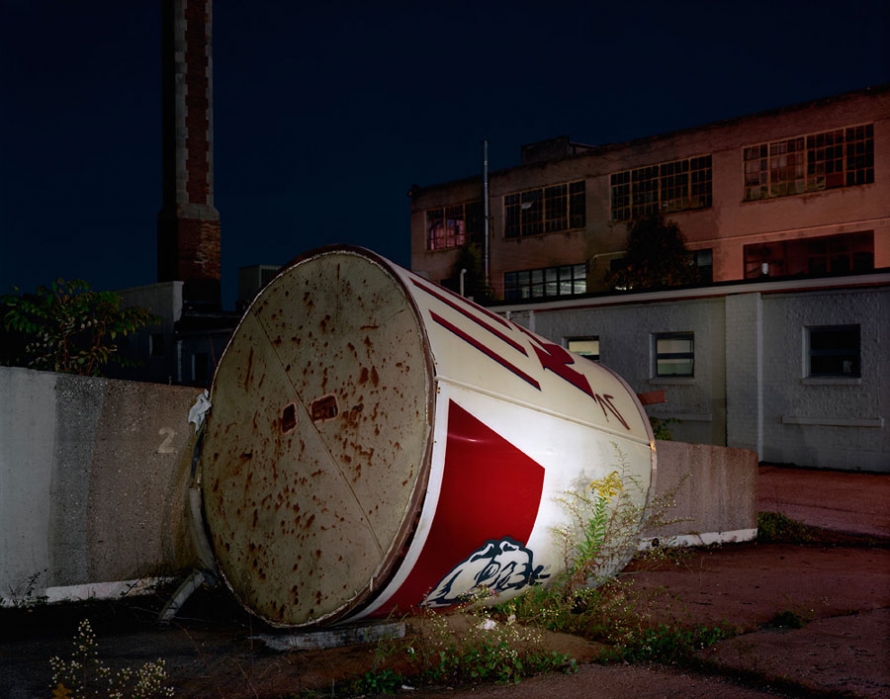 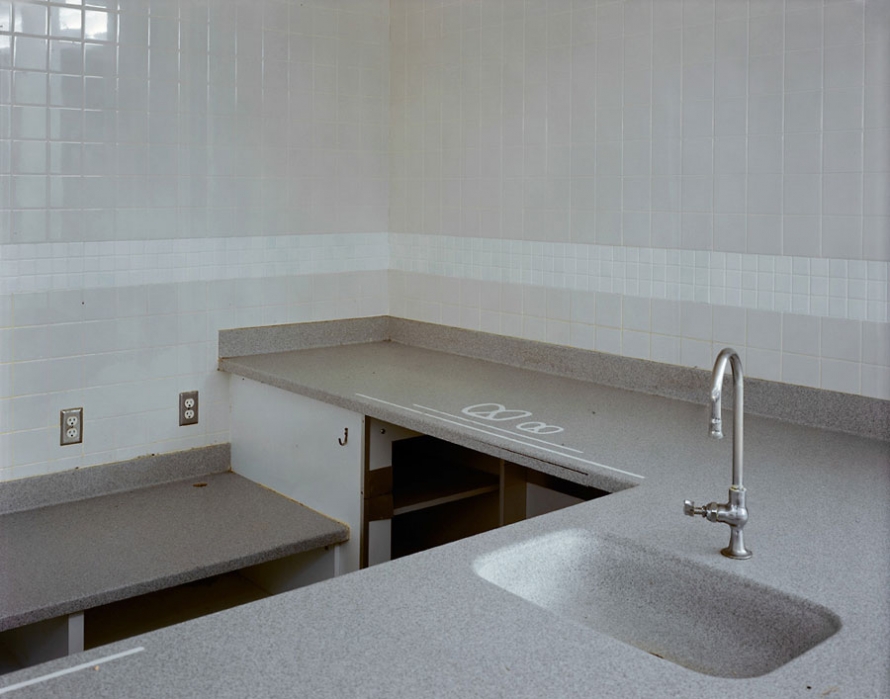 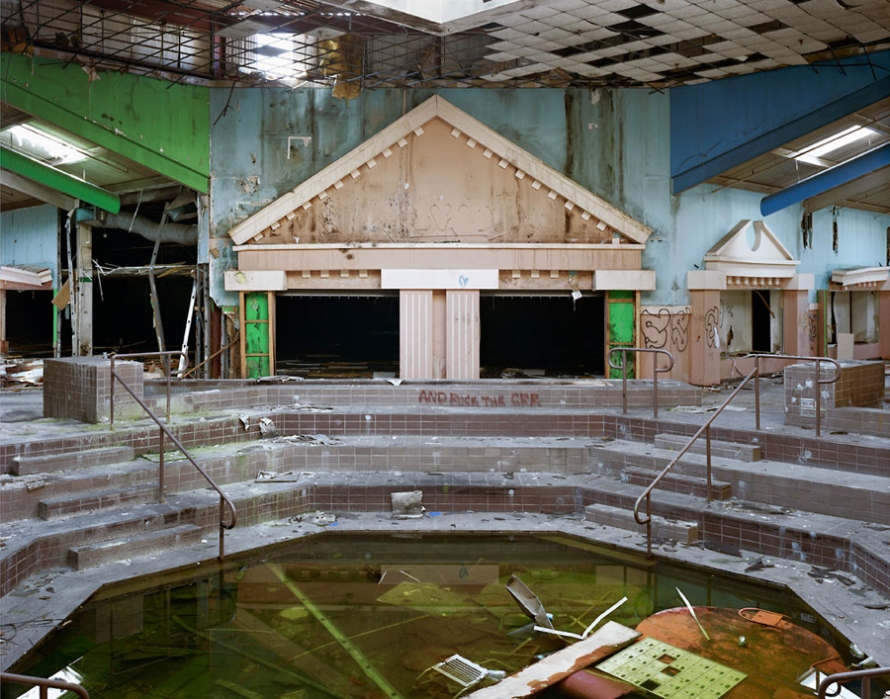 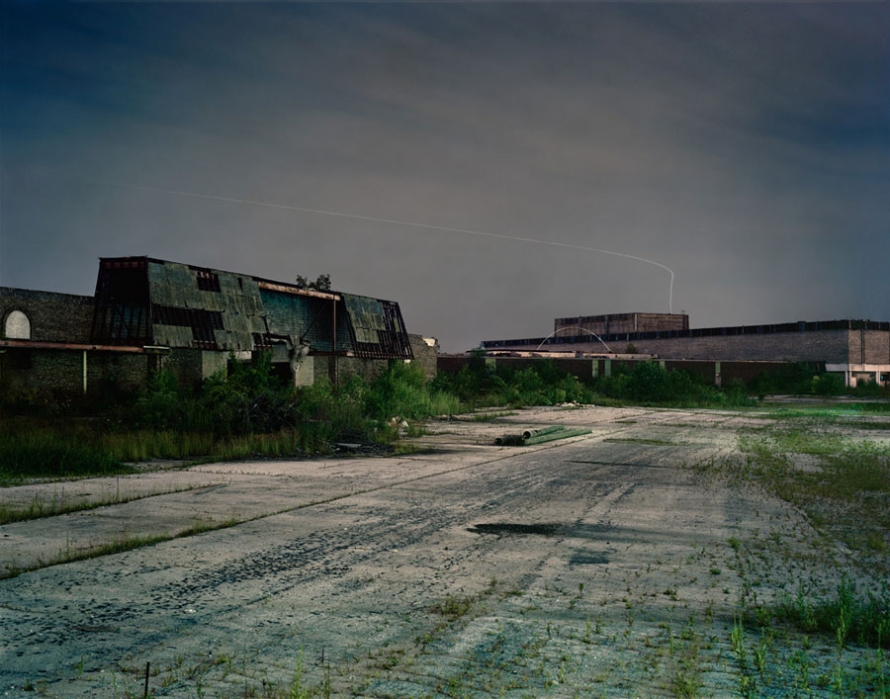 The idea went back to 2005 when I drove weekly past a large closed supermarket on the North Side of Chicago. At night the space really transformed from one of neglect and misuse to something incredibly visual that described a Rothko-esque painting space divided in three parts (parking lot, building, and sky). I spent a few nights making some photographs to try and replicate what I saw. I had been working on a larger project dealing with American consumerism, and it was no surprise to me that these spaces would fail and dwindle as fast they arise. I was in the midst of a deeper project, photographing in thrift stores and recycling shops as part of my “Copia” series, so I shelved the idea.

At the end of 2007 with many rumblings of recession, I thought of those pictures and began the project in earnest in May of 2008. In many senses it was a vindication of what I had been talking about in my earlier work. How can an economy sustain a lifestyle based on exponential growth and the leisure and wealth to support it? It’s not rocket science to expect these kind of illusions to fail. What’s strange is how ingrained the brands and spaces are to us that so many were not only surprised to see major retailers and malls sink but were saddened. Many of these ideas were set in motion decades ago.

Where in America are these empty stores?

It is important for me to travel across the country to emphasize this. The pictures are titled by the former brand that occupied the location so one would never know if the scene was Ohio, Nevada, or New Jersey without some research, but that’s not the point. The point is to create a sense that you are looking at the dead mall or empty Circuit City from your neighborhood. The traveling for me comes out of a obsession with not only cataloging so much of the issue but also making many subtle connections to landscape to be clear that we’re looking at the whole country.

How do you set up a shot? Do you have to get permission to get inside the buildings?

Sometimes I do make arrangements to get permission to photograph inside the malls. Sometimes they say no, other times I’m lucky. In some of the malls, they are in such dire states that there is simply no security there to tell anyone not to photograph. As far as the retail spaces, I show up and get to work. I’ve never been asked to leave a parking lot since there are no laws against photography in public.

To set up a picture depends on what’s in front of the camera. I start by doing lots of research online. Looking through Flickr, Google Street View, Deadmalls.com, and Labelscar as well as retail real-estate listings. I’m trying to get an idea of what I might find in a given location. Some sites change fast as I have to sometimes have good timing to find some of the “label scars” before they are painted over. Other times it’s simply driving, looking, and exploring. Once I get to a location I make tons of cell phone snaps to start to make decisions about what kind of picture to make. It can be obvious or subtle and it’s not uncommon to not even make the picture until months later.

Many abandoned big-box stores are renovated into schools or churches. What do you think should be done with these empty buildings?

Some buildings can be repurposed but so many cannot. Retail design and use is not only based on the space itself but also location. When a few stores go down often many others in an area go with them—a retail ghost town if you will. Though one can repurpose one space it might sit in a vast area of blight. The problem lies not in what we should do with what we have already but it seems more important to get a lot stricter about what new retail spaces we allow into our communities. The promises are always jobs and tax revenue, but that won’t help in the long run if the store folds or relocates to the next township who offers an incentive.

It may seem cynical but I personally would like to see many of the spaces simply be turned back into fields, woods, and natural landscape, rather than trying to discover some profound solution. This is actually happening not so much by design in Detroit where entire neighborhoods are disappearing. Rather than design a new use for the space, many are arguing to leave it and let it be.

Are these giant retail stores a necessary part of our culture?

I think many of the initial ideas that Victor Gruen had for malls were in the right direction, but sadly they’ve fallen so far from community center. People are moving back to downtowns, largely where community is unavoidable. One has to know one’s neighbor, and when you buy something from a merchant you know, you’re aware of the intrinsic act of exchange.

I cringe to think we’ll all just be under one giant Costco roof like in the movie Wall-E in the future, though it sometimes it seems quite feasible. Though the internet serves as a much better roof than Costco!