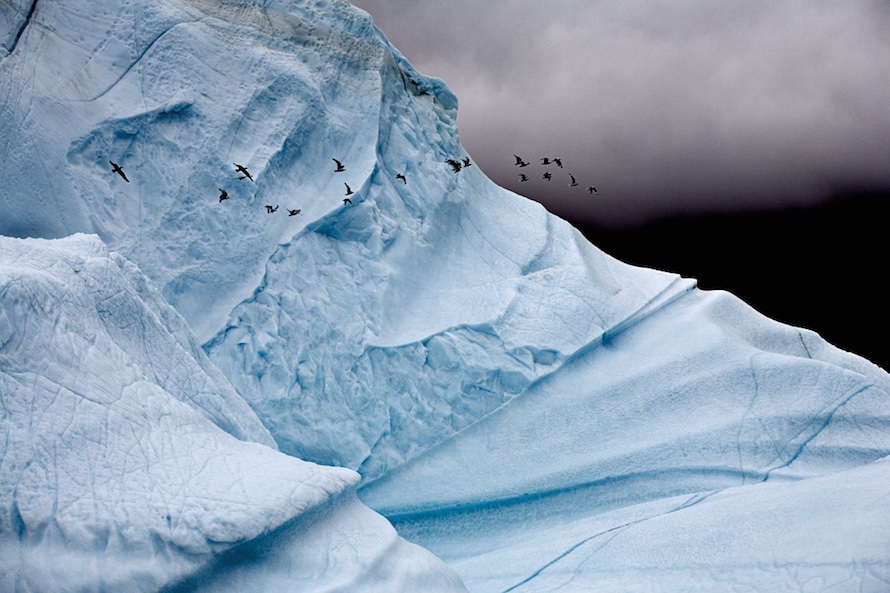 “As our ship passed by this iceberg, which stood some 300 feet out of the water, the birds were disturbed enough to leave their resting spots. I love the elephant-skin quality of the surface of this berg.” Iceberg Detail with Kittiwake Gulls, Eastern Greenland, August 2006.

Camille Seaman’s marvelous photographs document 10 years of exploring the quickly changing landscapes of the Arctic and Antarctic, where no two icebergs are alike.

The following pictures, captions, and essay are excerpted from her new book, Melting Away: A Ten-Year Journey through Our Endangered Polar Regions, to be published by Princeton Architectural Press on Dec. 2, 2014.

Readers who pre-order the book may receive a free poster of one of the book’s photographs. 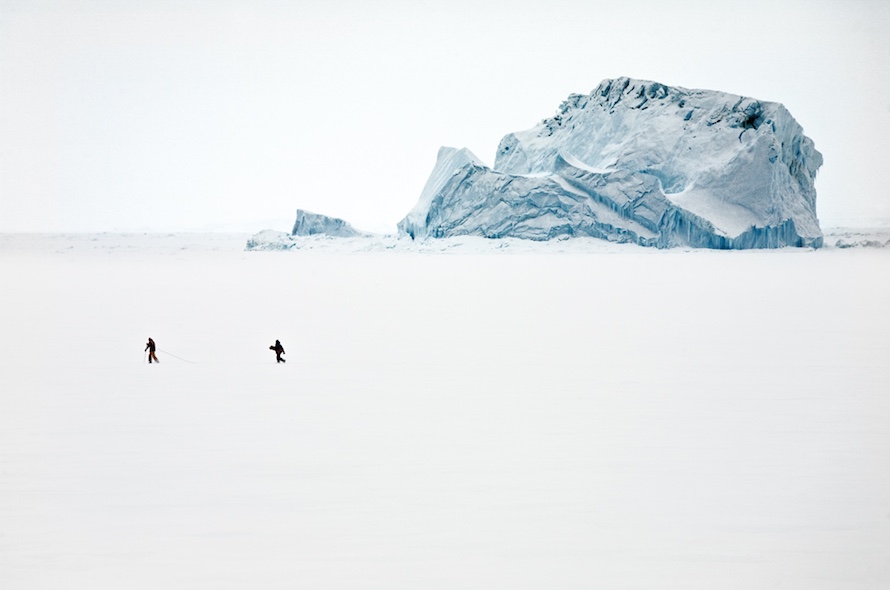 “After two days of our ship shoved into the sea ice during a blind blizzard, the weather finally cleared. It was safe enough to allow two expedition staff members roped to each other to test the thickness of the sea ice. On the ice, they laid a path for the passengers to reach the massive icebergs and visit a nearby emperor penguin colony.” Walking on the Frozen Sea Ice, Cape Washington, Antarctica, December 2006. 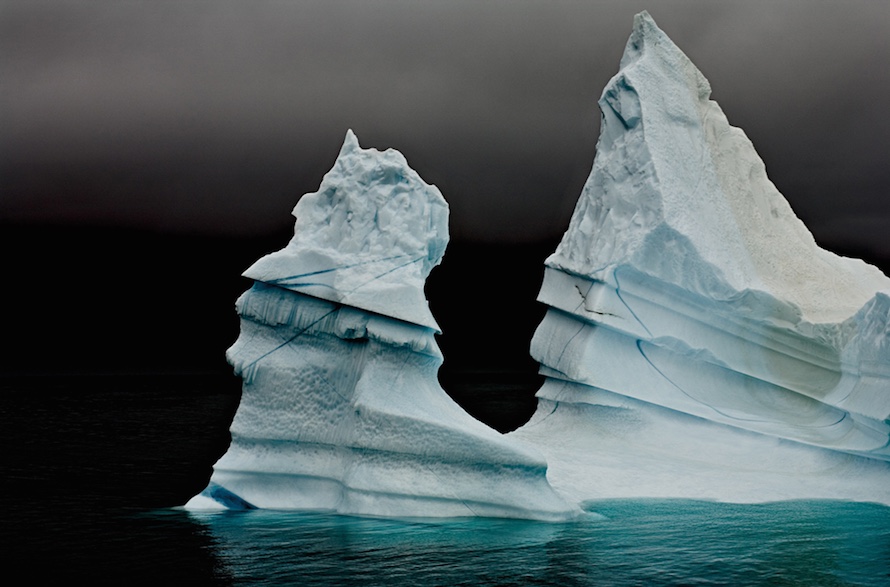 “There are several types of iceberg shape and size classifications. This pinnacle iceberg was quite spectacular.” Grand Pinnacle Iceberg Detail, Eastern Greenland, August 2006. 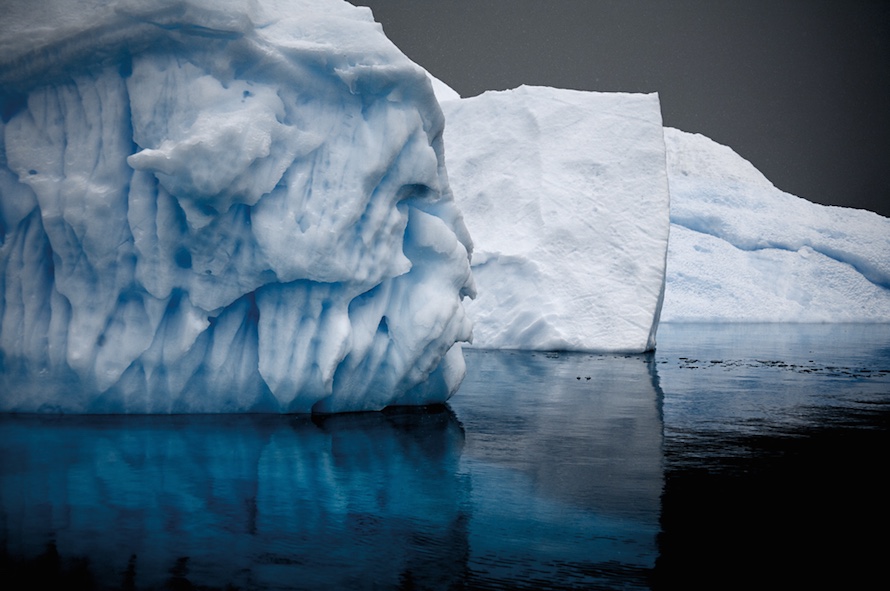 “‘Bergy bits’ are small icebergs that may be no larger than a house. These three bergy bits, jammed like parked cars next to each other, display the variety of shapes and personality that an iceberg can possess.” Bergy Bits in Errera Channel, Antarctic Peninsula, December 2007. 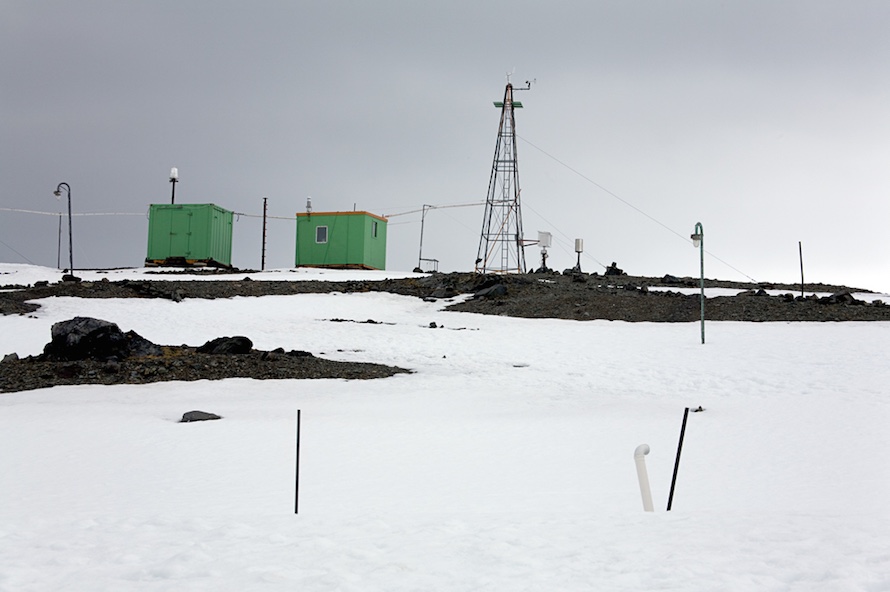 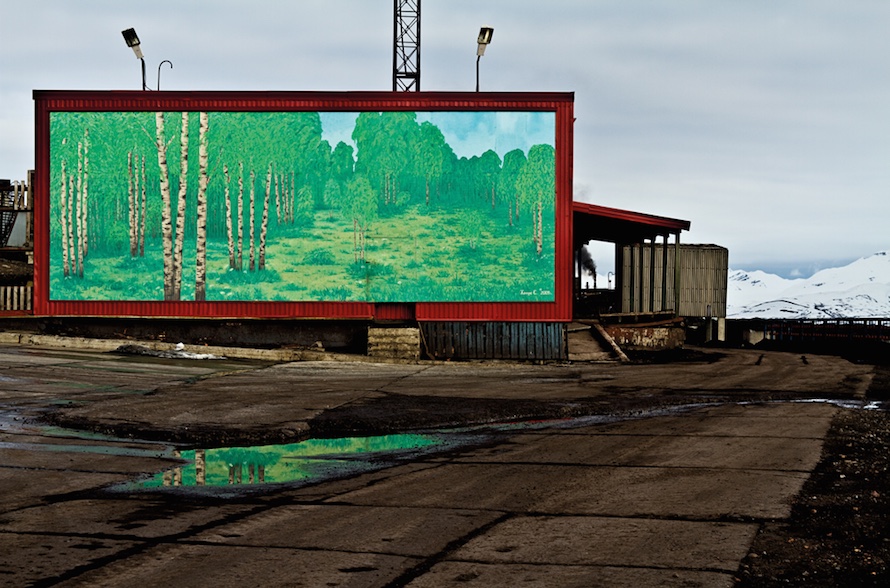 “Barentsburg is still a functional coal mining settlement with 500 full-time Russian and Ukrainian miners living in Soviet-era dwellings. The miners have been known to run out of food and supplies, which are shipped in from Russia.” Russian Coal Mining Settelment of Barentsburg, Svalbard, 2010 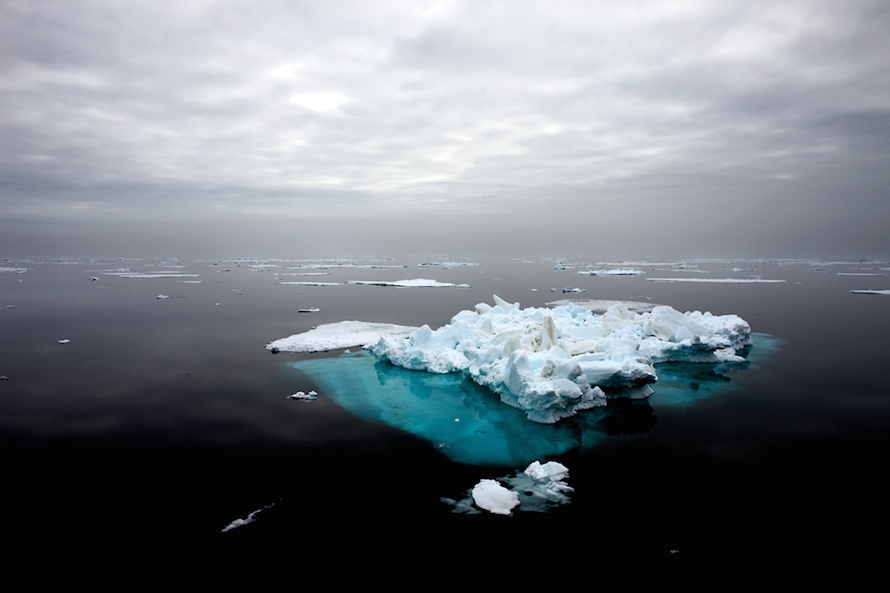 “Less and less multiyear sea ice remains in the warmer temperatures of the Arctic summer. Less sea ice means many things, from the  loss of hunting grounds for polar bears, to more heat being absorbed by the growing dark surface of sea. Climate models cannot keep up with the actual rates of melt and the unforeseen side effects of our melting poles.” Sea Ice Remnant, Svalbard, July 17, 2008. 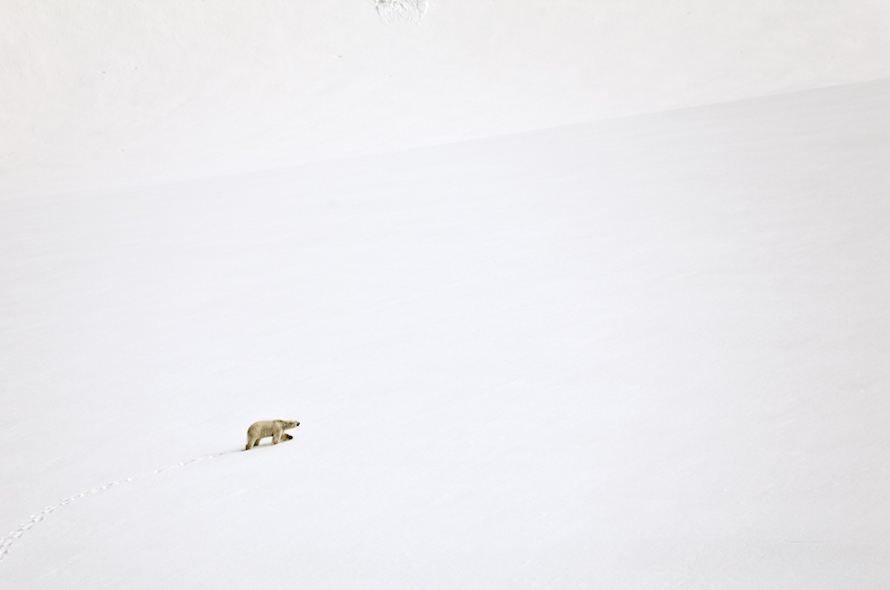 “This polar bear was making a perilous journey up and across a glacier. The polar bear’s incredible sense of smell will guide away and around treacherous crevasses. After his journey, I was relieved to see him down by the shore on the other side.” Polar Bear on Glacier, Svalbard, June 2009.

I was walking a primitive path, leading away from the town and toward the strait and the sea. I was walking on the frozen sea, but I may as well have been on some distant planet. My extraterrestrial moment, only I was right here on Earth! I was so thrilled that I almost didn’t notice the young man pull up beside me on his snowmobile.

“Okay,” he said. He cocked his head in confusion and rode away. Several other people pulled alongside me as I walked, always asking the same question, always replying to my response in the same way. After I had walked for over an hour with no traffic, the twigs were no longer visible. Two people rode up on either side of me. On one snowmobile was an Inupiaq man. On my right was a Russian woman. The man asked me a different question than all the others who had stopped previously.

“Where are you going?” he asked, and I replied, “I’m trying to get to where the ice ends and the sea begins.”

I really thought there would be a clean edge of ice and suddenly there would be the dark water of the sea. I was so naive and misguided in my thinking. The man told me that was 22 miles away. They said they were headed out there to ice fish and I was welcome to ride with them, but they also let me know they would not be coming back. They were planning on camping out on the ice. I thought about it for a moment. I had no supplies on me. No water, no shelter, no food, no extra clothing. Nothing. Just my camera tucked snugly in the warmth of my parka. I knew I had no realistic expectation to actually reach Russia, and certainly, they would not permit me entrance even if I did make it that far. “Well,” I thought to myself, “I have never been on a snowmobile before.” Here was an interesting opportunity. I told them I would ride with them for a short while and climbed on the back of the man’s machine. I quickly realized that these machines go fast! We were going sixty miles an hour. As we were zipping along the ice, I began to realize that this speed meant distance. I did some math in my head, 60 miles an hour divided by five minutes. I tapped the man on the shoulder, “Stop! Stop!” I said. “I have to walk this back.” They stopped, let me off, and I thanked them. Watching them ride toward the horizon, I took a photograph of their backs as they drove away.

At that time of year, the sun hangs low in the sky just above the horizon. It never climbs high in the sky and so it seems to move sideways. Around one in the morning it dips below the horizon and then climbs back up two hours later. Though it’s never very bright, it is a beautiful thing to watch the sun move sideways.

After the snowmobilers were out of sight, I turned to look for the town. I scanned the horizon and could not find it. The town was gone. All around me 360 degrees of just white, just white, with hardly any difference between the sky and the ice. I freaked out. I realized that no one in the entire world knew where I was. All of the realities of my situation became clear in my mind: I was on the frozen sea. I could fall through the ice. There were polar bears out here. There could be a whiteout and I would never find my way back. If it got much colder, I could freeze to death. I had no food or water. What was I thinking? I tried to calm myself and decided to follow the tracks of the snowmobiles back before the wind wiped them away.

During the five plus hour walk back, I had an awakening. Everything that my grandfather had been trying to show me when I was a child was confirmed. In this extreme part of the world, I clearly understood that I am a creature of this planet. I am literally made of the material of this planet; we all are. As I walked the many squeaky steps across those white miles, I realized the absurdity of religion, of border, of culture and language. At the bottom of it all, we are all made of the same material. We are all earthlings. There is no separation. There is no distinction. None of us was born in outer space; we will all return to the material of this Earth. I understood that I was standing on my rock in space. I understood the immensity and the minuscule nature of that. I understood that I meant nothing in the scale of time and space and history of this planet. If I were to die, snow and ice would blow over my cold dead body without a thought, but the fact that I was still alive, standing on the ice and pondering such things was a miracle. I began to think...if my sweat becomes the rain, whose sweat is this ice? How many ancestors ago? What creatures created this? They are all my relations, all my relatives, and in that I understood the integral nature of this planet. We truly are a web of life, each connected to the other. I began to see how absurdly we as humans are presently acting and thinking. We are behaving as if we are somehow separate or above all other life forms on this planet, thinking we can do whatever we want. How silly we are to be surprised at the consequences of such practices. I was a different person when I climbed up the bank and walked back toward the Nullagvik Hotel.

What I did not know at the time was that as I made that walk out onto the frozen sea I was actually a few weeks pregnant with my daughter. I realize now that as I awakened to this new perspective, my child was growing in me. She has been with me through this journey. I awakened as a mother.

Excerpted from Camille Seaman’s Melting Away: A Ten-Year Journey through Our Endangered Polar Regions.