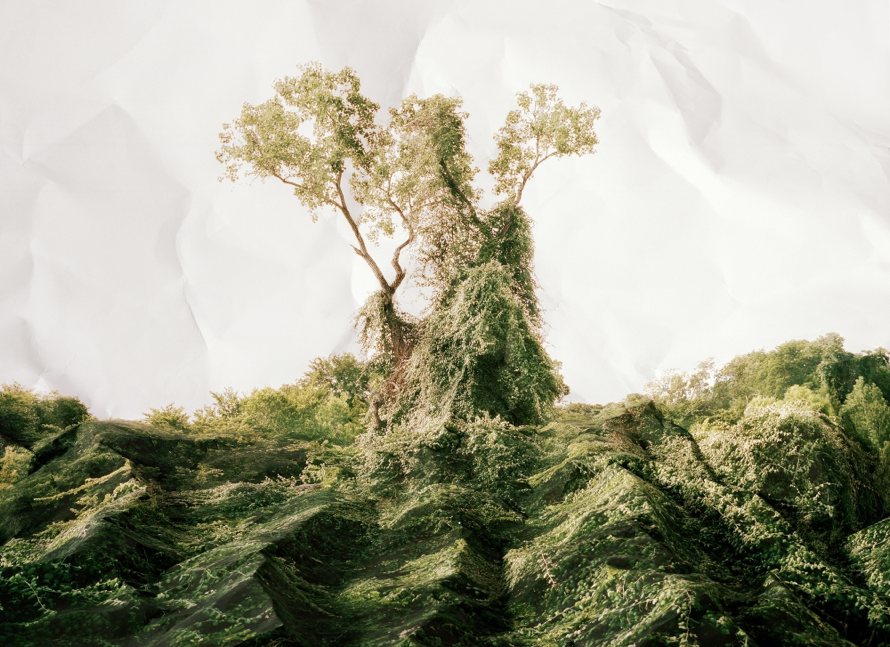 In Laura Plageman’s series, old nature pictures are ripped, folded, and turned into sculptures, then re-photographed to become new landscapes.

Laura Plageman is an artist and educator who lives and works in Oakland, Calif. Her images explore the relationships between the process of image-making, photographic truth and distortion, and the representation of landscape. Plageman has exhibited her work in San Francisco, New York, Portland, Seattle, and Galway, Ireland. She earned a BA at Wesleyan University (Middletown, Conn.) and an MFA from the California College of the Arts (San Francisco, Calif.).

All images © Laura Plageman, all rights reserved, courtesy the artist. 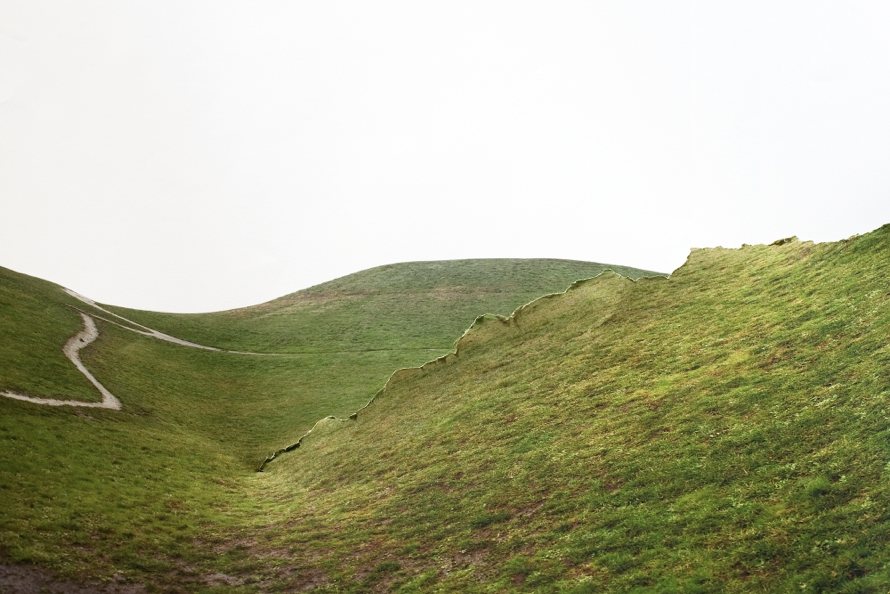 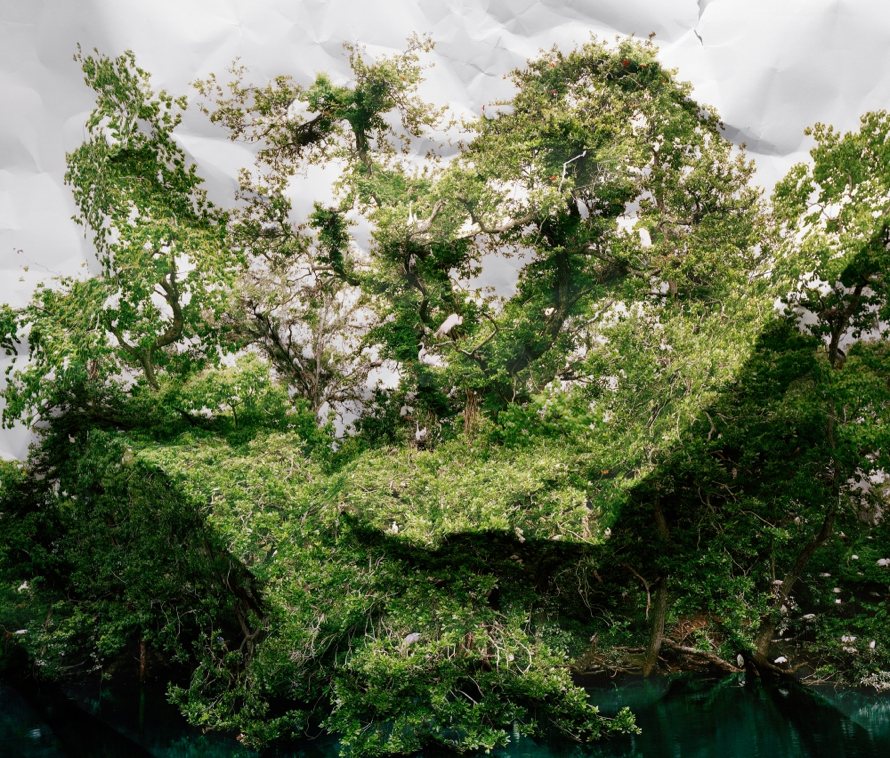 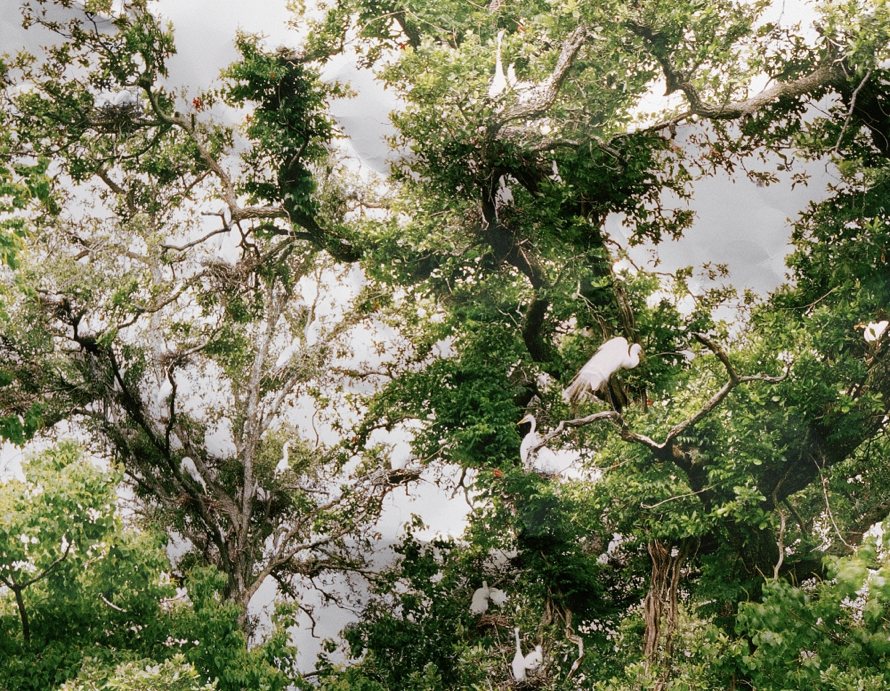 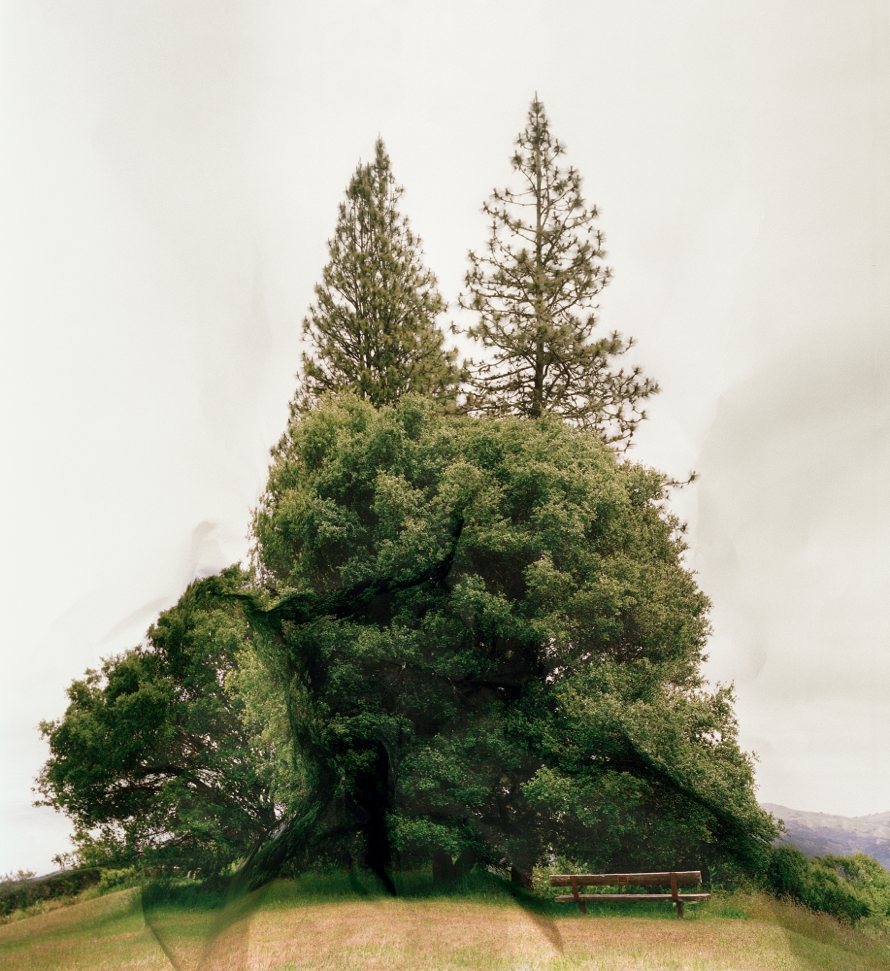 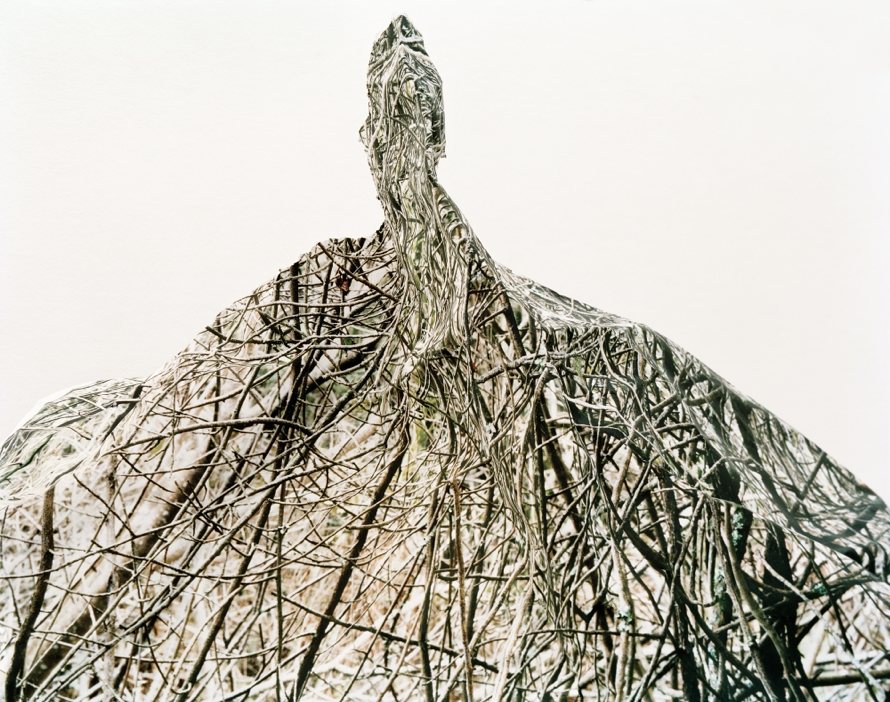 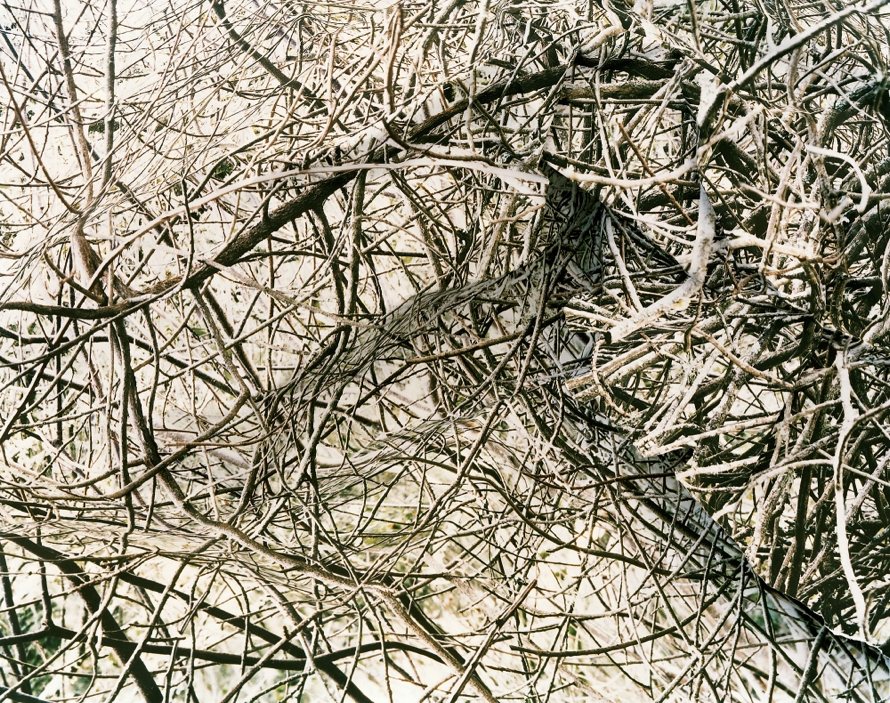 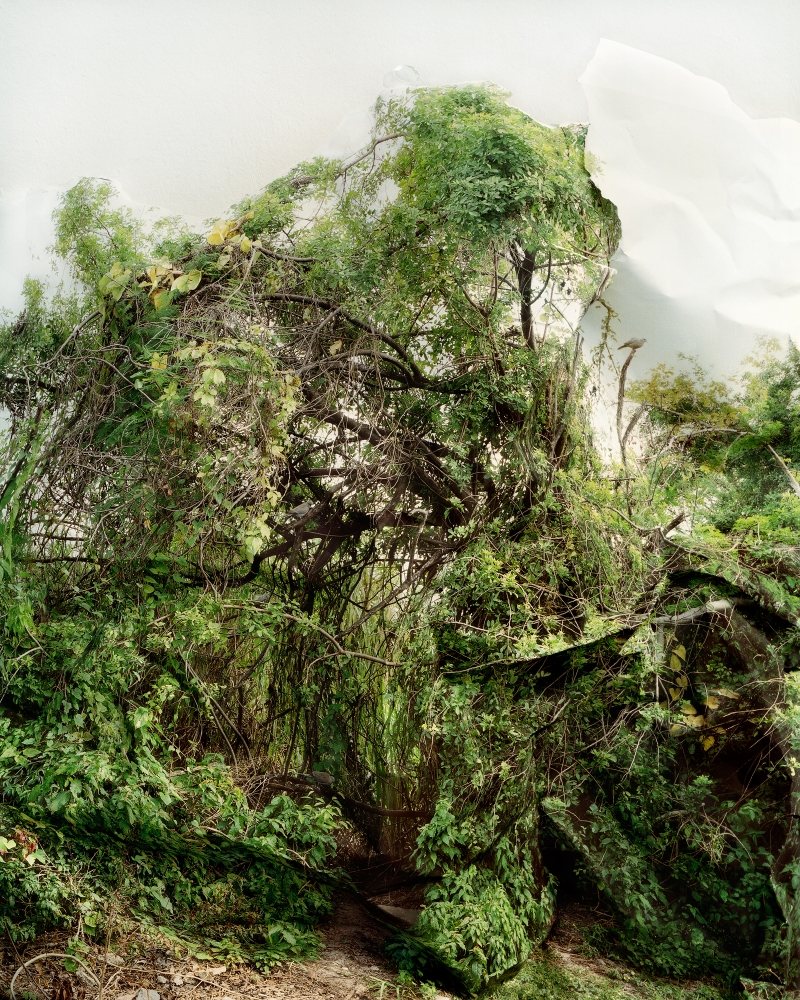 Response to print of Shrub with Doves, Florida, 2006.
TMN:

In your project statement, you say you’re dealing with photographs both as representations and objects. How does the final image come about? Is this a matter of Photoshop or metal scissors?

I start with one of my printed photographs then physically alter the image sculpturally. When I’m satisfied with the results, I re-photograph the image as a still life. Because I’m interested in the materiality of the photograph, it’s important that I affect the actual printed object. There is often evidence of my process in the final image: rips, tears, folds, and places where the ink is rubbing off of the paper.

My photographic process involves both traditional photographic techniques and digital imaging. I consider both to be invaluable tools. Most of this series is shot with a large format film camera, but I print digitally throughout my process.

You admit to having a fondness for kudzu?

I admit to being a kudzu rubbernecker. But it’s more from fascination than fondness. I’m interested in invasive species and their impact on a landscape over time. Kudzu was introduced in this country in the late 1800s, and it is now thriving at the expense of other organisms and ecosystems. It can grow a foot a day under ideal conditions. I’m curious about the psychological effect that can have on people—especially armed with the knowledge that people had a strong hand in creating an out-of-control situation. In general, this applies to many of the landscape photographs I make—I’m interested in plants and organisms in places where nature never intended them to be and how people relate to those spaces.

Kudzu blankets the landscape and creates a sea of greenery, hovering above the ground. I like to imagine what lies underneath its silhouettes, what landscape once existed. I’m drawn to that type of dark beauty.

How did the series originate? Was there something wrong about the original pictures that you wanted to modify?

The first “response” happened in my studio one day, born somewhere between curiosity and frustration. I was looking at a large print on my wall that, for one reason or another, felt like a near miss. I wanted to acknowledge the disconnect I was feeling between the place photographed and the photograph itself. I took the print off the wall and began sculpting it as a still life, exploring its dimensional qualities and altering picture elements in front of my camera. I was excited by the transformation of the print into something that felt more alive to me while still retaining the essence of the original scene.

I had been exploring digital printing and was enjoying the qualities of ink on paper. It was my working with matte paper that allowed me to physically sculpt my prints in ways that plastic coated C-prints don’t afford. Having printed in the chemical darkroom for years, always being careful never to ding a print, I was now looking at prints differently—they felt less literal and less precious and a bit more painterly and uncanny. I was excited to explore new possibilities for image making.

Any new photographers exciting you at the moment?

Both, please. In that order.