A never-quenched need for aged, obscure cookery manuals, preferably the kind with recipes for Tunnel of Fudge.

‘This is an era of dips and dunks and sticks and picks. And we say ‘hurrah!’’
—Good Housekeeping’s Appetizer Book, 1958


Like many addictions, my little-cookbook collection started innocently enough: Luv’n’Cookery, a chunky, plastic-comb-bound, manual-typewriter-ed tome put out by the local Senior Center or Jaycees or someone (ours was not a Ladies’ Auxiliary kind of town). My mom still has her copy, and I recognize a lot of the names and still think the line drawing on the cover looks like my grandma. But perhaps it was only a gateway to the profounder pleasures of The Impoverished Students’ Book of Cookery, Drinkery and Housekeepery, originally published in 1965, which gave cheap decorating tips, including how to gussy up your pad in anticipation of a professorial dinner visit, in addition to a chapter on the finer points of making wine in the home. I lost track of that one some time after college and I’ve never stopped looking for another.

‘Never stopped looking for another’: this means something extra, maybe, when you’re talking about 30 or so letter-sized pages stapled in the middle with a card stock cover. Or the Holy Grail of fin de siècle American cook-bookery: Joys of Jell-O’s ‘Ring-Around-the-Tuna.’ These things take time and energy to find. The New Joys is all over the place, but the original didn’t turn up in my elated clutches until last spring. (I’m sorry to report, however, that ‘Tunnel of Fudge,’ while a legitimate recipe, is just a disappointingly ordinary Bundt cake, and not part of the Jell-O repertoire.)

I’ve had a kitchen fetish for years. I have a pink Sunbeam mixer (with matching bowl). I have a lot of aprons, some of which (I’m thinking particularly of the rhinestone-studded tulle) are not suitable for cooking in. I have a metal recipe box, purchased in mint condition for some three dollars. Within are index cards detailing things like ‘Devils on Horseback’ and an as-yet untried sherry breakfast cocktail called ‘Andaluz.’ Without is a flip-up stand that, when filled, answers the eternal question ‘What’s Cooking?’ And I have a lot of cookbooks. Big, real, serious cookbooks, I swear. But I can’t stop buying the little ones. Promotional booklets made by food companies. Government pamphlets. I do use my Larousse Gastronomique, but I simply adore Pies Men Like.

DON’T LET FRUIT PIES RU.N. OVER: Seal edges carefully … Or, insert several short pieces of straight macaroni to act as ‘chimneys.’ Remove them when pie is done.’ (Published for General Motors Men and Women by the Personnel and Employee Relations Staff.)

I have a particularly bookish friend who lives upstate. Much of our time together has consisted of trawling the highways and byways for book sales (one day I think we managed three states—God bless East Coast geography). The Association of American University Women hosts a sale once or twice a year in Allentown, for example, and many libraries have year-round bins. Very early on during these sojourns, I took to leafing through boxes and piles of little pamphlet cookbooks (looking, of course, for The Impoverished Students’ Book and ‘Ring-Around-the-Tuna’).

At most book sales, these cookbooklets are generally 25 cents—in any case, never more than a dollar. In real bookstores I’ve paid as much as six bucks… but that was for Kitchenette Cookery with the fabulous Aubrey Beardsley meets Martha Stewart cover and actually handy hints for cooking in small spaces. Freezing Foods at Home, with its perky line drawings and handy diagrams, I also bought as much for substance as style (and a bargain, at 50 cents). But it was those first sales—the AAUW, the old Erie-Lackawanna Railroad station—that truly got me hooked. Finding, in such pastoral settings, such wholesome and inexpensive examples of the type of Americana that makes me feel most unashamedly American, was a double treat for a poultry-trussing gal like me.

Among the more tantalizing things about these books (and it sure isn’t the woozy sheen of early ‘60s Technicolor macaroni photos), are the lists at the front advertising ‘other books in this series.’ This, I think, is what threatens to send me over the edge. I find myself becoming deeply concerned about what ever happened to, for example, The Amy Vanderbilt Success Program for Women. I have Add Spice to Your Life, but what other valuable lessons have I not learned?

And while I’m perfectly content with owning only Manual No. 2: Perfect Pies and How to Make Them, I’d give my best starched apron for the ‘strong attractive binder,’ which the Proctor & Gamble Home Economics Department devised for these three-hole-punched gems and sent to lucky housewives ‘on receipt of its cost which is 25 cents in stamps.’ Stamps. Yes, if only I had the stamps… 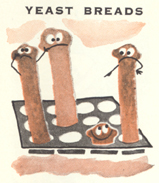 
See, there’s this feeling I get that agribusiness, and even the government, used to care a little more about us—probably highly inaccurate, but a girl can dream, can’t she? Take, for example, Making and Using Cottage Cheese in the Home, a.k.a. U.S. Dept. of Agriculture Farmers’ Bulletin No. 1451, a handy 14 pages of newsprint with a photo of a jaunty dairymaid on the cover. The D. of Ag. especially wants you to know that 1451 ‘supersedes Farmers’ Bulletin 850, How to Make Cottage Cheese on the Farm, and Office of the Secretary Circular 109, Cottage Cheese Dishes.’ Just to be sure you’re making state-of-the-art homemade cottage cheese and cottage cheese products. And Ralston Purina: Though they really want to sell you cereal, they also want to remind you (or did in their Mother’s Manual in 1926, anyway) that ‘Open windows, open pores, open bowels and open minds open the Road to Health.’

Not just your own personal health, either, but the nation’s health! In August of 1917, a representative from the United States Food Administration typed a letter to Miss Ruth Watson at the Royal Baking Powder Company telling her that yes indeed, ‘the use of baking powder breads made of corn and other coarse flours instead of patent wheat flour is recommended by the Conservation Division of the Food Administration. The wheat needed for export is thus conserved, and at the same time healthful food for our own people is provided.’ And so: Best War Time Recipes. Today, the FDA tells us to ‘review traditional recipes that, when served, contain raw or under-cooked eggs. Replace with recipes that, when served, contain thoroughly cooked eggs.’ Useful? Sure. But do I feel loved? Not really.

There’s a weird sort of nobility at work here. Sure, Dad was bringing home the bacon and Mom was frying it up—and maybe the government or Gold Medal Flour didn’t really care about your digestion—but somehow that image seems, if not more right, at least more comforting than a world of celebrity chefs and the Atkins diet. People cook to eat or to impress, but they also cook to convey love and comfort to those around them. However illusory this may be, it’s still something nice to hang on to, if only as an artifact.


Speaking of artifacts, sometimes a cook’s notes or personal recipes or other ephemera come to light. Some Hints of Deep Fat Frying contained, in addition to its ‘55 tested recipes,’ a typewritten Macmillan-imprint index card with publication and blurb info for The Presence of God: A Study in Divine Immanence and Transcendence, by W.H.G. Homes, Priest of the Oxford Brotherhood of the Epiphany in India, Canon of Calcutta Cathedral, Examining Chaplain to the Bishop of Calcutta. And what was on the flip-side, in different type, with right and left margins of zero? PIQUANTE PEACH SALAD. (Which, for the record, involves Del Monte peach halves, gelatine, cinnamon, salt and paprika, turned out on lettuce and served with mayonnaise. The book sounds better.)

Also, mysteriously tucked inside a 1945 copy of Favorite Recipes for Country Kitchens, is a Rhode Island newspaper clipping of a large photo of Julia Phillips, whose memoir You’ll Never Eat Lunch in This Town Again (copyright 1991), ‘has offended many film industry powers,’ according to the caption. Why is it here? Why does it seem to be bookmarking ‘The Land of the Pie’? Is the person who thought it was so important to clip out this photo the same Patricia who wrote her name on the front and back covers, as though practicing for something? Or was Patricia the mother or grandmother of the would-be Hollywood mogul? We may never know the—

Sorry, what were you saying? You just wanted to know how to poach some eggs? Whirl the water into a mad vortex. Joy of Cooking. Word.

Author's note: Thanks to the many people who sent helpful emails regarding the availability and whereabouts of The Impoverished Students' Book of Cookery, Drinkery, & Housekeepery; your kind assistance is much appreciated. Very special thanks to the person who actually gave me a copy. Interested parties may purchase a copy here.