Cuttlefish, I Am Thine 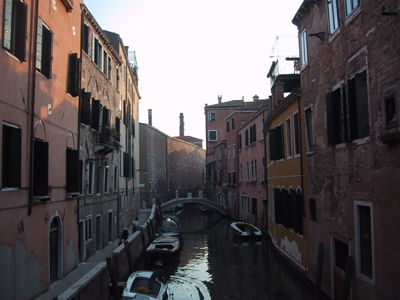 My sister moved to Venice, Italy for a job so we went to visit her with my parents for a week. I had never been there; my wife was last there when she was a kid. People tell you ahead of time it’s a city of canals built on sticks in a lagoon, and you buy it, but it’s a bit more awesome when you arrive at your hotel by boat.

We rented an apartment for a week in Dorsoduro, a quiet neighborhood south and west of the tourist swamps, across from Giudecca, an island south of Venice where my sister lives. We had a bedroom and a kitchen on an alley tightly crammed with houses between two canals. Most windows were flanked by driftwood shutters. Down the alley, behind a tall brick wall, a large private garden flowered over the gate. Most green in Venice comes from algae, so Venetians clog their entryways and sidewalks with plant boxes and short, potted trees. I saw an old woman a few times across the way, putting out her laundry. One morning, on our way for coffee, I said hello, she looked back cautiously and spoke quickly in Italian, and when I tried to explain I didn’t speak Italian, she spoke even more quickly and smiled a bit madly at me. (That night we read through the guestbook in our living room. One guest had raved about the apartment, loved the location, etc. etc., though at the end he mentioned the crazy old woman across the street had been an unexpected feature.)

Rest, caffeinate, walk, caffeinate, eat, drink, caffeinate, rest. For my wife and I, our only long-term plan at this point is to move abroad, and for language and work reasons, and friends, the destination until now has been Paris. But what if my sister stays in Italy for a little while? What if, say, the old woman needs a housekeeper to hang her laundry? Or an assistant to help pickle the tourists in her basement? Venice may be a jaw-dropping spectacle, and proudly so, but it’s also sedate and modest, with a demure snobbery backing the northern accent. (We had more than one conversation where a native dismissed southern Italians, including Romans, as idiots.) One night we had cocktails at the home of my sister’s boss, a Venetian whose family traces its roots in the city for centuries, and he complained how Venice’s population of natives is dropping, losing ground to rich Europeans and Americans trading their 401k’s for small homes near the Tod’s boutique.

We slipped away and toured his house, itself a palace of sorts, with windows overlooking the Giudecca canal. The sun across the water, a burnt-orange color, was setting behind some cathedral, turning its marble even whiter. Vaporettos—the public transportation boats—zoomed over the chop of faster motorboats. I thought, some people do retire in their twenties. Very few, but some. We must find them and torture them for their secrets.

Lots of windows in Venice fly big rainbow flags. They’re everywhere, more prominent even than in the Village during the Gay Pride parade. My sister explained these were the flags people carry in peace protests, and some Venetian friends, just back from a trip to Portugal, told us how they’d been harassed there about Italy’s role in Iraq, especially now that Spain has withdrawn its troops. I found this endearing—one set of proud Europeans attacked by another—but I was a bit disappointed, cutting into my pizza, to realize Venice wasn’t the bastion of gay pride I’d presumed. 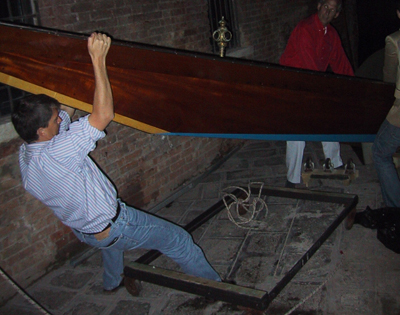 Our friends Andrea and Sandrina took us for a ride to dinner in their puperine. The boat belongs to Andrea, who’s a boat nut; their bathroom is papered with pictures of very complicated knots. The boat’s a bit like the gondolas floating German tourists around the canals (for about a hundred dollars for a 20-minute ride; imagine the buggy rides around Central Park, but instead of a horse, a young man in sunglasses with an enormous pension around the next corner) except it’s more narrow, and extremely handsome, shellacked or polished (or whatever) to a deep chestnut amber. At one point, cruising the Grand Canal in the dark, Andrea yelled at a police boat going by very fast. He explained they’re only allowed to go so quickly if they have their lights on, signifying an emergency. This, Sandrina explained, was true Venetian attitude: if you think the police are breaking the law, you let them know it, with a tone of voice as though you’re addressing a dog who’s just peed in your soup. In New York this would get you a ticket, or at least a 15-minute lecture. In Venice, the cops slow down.

I’m sure a thousand people have written in a thousand guidebooks exactly what purpose the small basin (equipped with hidden faucets and a drain) next to the toilet serves, but a) I didn’t read them, and b) I proved quite satisfactorily to myself that it is not a urinal, nor an effective way to wash your feet, nor better at rinsing your ass than a quick shower. 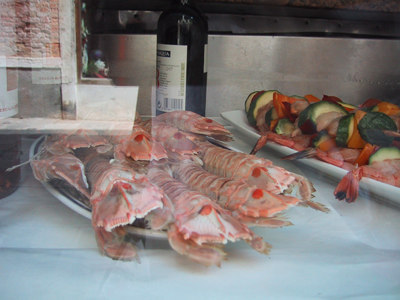 Strange beast, what are you? (Are you mantis shrimp? Thanks Zach.)

One morning we took a vaporetto to Lido, the local beach, and rented an umbrella and two chairs on a putting green for $50. A decent view of the water would have cost $140. But they had a small cafeteria, with a hot bar serving bow-tied pasta with fish in a tomato and cream sauce, so good it would have cost $32 for a plate in New York. Italy’s pasta is a different beast than anything in the States—no wonder people hate carbs here, once you realize our spaghetti’s made from sawdust. I ate about four or five meals a day in Venice, and drank, on average, eight to ten coffees, so I looked like a hyper cow between naps. My sister’s desk at work is two steps from her office’s espresso machine. I fear she may catch epilepsy before she leaves.

We became friends with the owner of La Bitta in Dorsoduro, which, if you’re in Venice, I can’t recommend highly enough. The food is extraordinary and unpretentious and shockingly cheap, and she has two zillion Grappas, some of which taste like very peat-y scotch, others like flowers, none like butane.

We caught a four a.m. boat to the airport for our very early flight to Brussels then New York. Skimming across the lagoon, we couldn’t yet see the sun, but the city behind us was dimly lit with street lamps, a dwarfish, dense platoon of orange and white buildings carrying church spires on their shoulders.

The route to the airport is marked with telephone poles sunk in the water. Outside it I spotted boats of fishermen at work. Two had stopped over a spot, and while one man held a flashlight over the others, the rest hauled up traps and nets. The scene played out across the lagoon, a tiny light over a few people working. I was reminded of New York, when you see a big apartment building from far away at night, a light flicks on in a room and you see someone puttering around in their bathrobe, looking for whatever it was that kept them from sleeping.