“Get the fuck out of the motherfucking lane, motherfucker!” was a more poetic way of putting it than I may have chosen, but the bike messenger shouting at the cabbie on Sixth Avenue the other day was merely expressing an emotion all cyclists share.

The bike lane. It is ours. Not yours. Do not double-park in it. Do not wheel groceries in it. Do not set up art projects in it. You are making our lives dangerous.

Take a recent incident in Brooklyn. I was biking south on Henry. A woman with pigtails was pedaling in front of me. In front of both of us was a silver Mercedes coupe, idling in the bike lane. We had to slow to squeeze past, and in doing so the woman’s handlebar brushed against the Mercedes’s mirror.  In an instant, the Mercedes roared to life and fish-tailed after her and—I couldn’t believe I was seeing this—swerved right at her. Screech! The Mercedes missed her by an inch; she careened over the curb with pigtails flying.  After stopping to make sure she was OK, I raced after the receding coupe with no specific plan in mind beyond heroism.

Now, since I am a privileged white guy who is often embarrassed by the behavior of other privileged white guys, I assumed the driver was going to be some white dude from the Rockaways shouting into his cell, the stump of a cigar clenched between his stubby fingers. So when I caught up with him after five blocks, and rapped on his tinted window, and his tinted window rolled down, I was extremely surprised to be looking at Toni Morrison.

Stately, distinguished, grandmotherly and African-American, Ms. Morrison glared back at me from under her regal gray dreadlocks. OK, it wasn’t Toni Morrison. Maybe it was her terrible sister.  But I was flustered to be facing—then not facing—the Pulitzer Prize-winning novelist, and trying to reconcile my various prejudices, and belatedly conceding that all races and genders and ages share the potential for douchebag-ery, so when I asked her why she almost ran over someone, my voice probably sounded a little shrill.

“That bitch touched my car!” she shouted in response, and with a closing whoosh of her window, sped off.

In retrospect, I would like to have said a few things to her. For starters, are you insane? Do you really think a brushed car equals a crushed human? I would have pointed out that equating automobile and cyclist rights is a good example of The Fallacy of the Balanced Argument—to balance between two unequal positions is not balanced at all. Motorists are protected by metal. Cyclists are protected by air. They don’t compare. So, please don’t hit us. Please, stay out of our motherfucking lane. 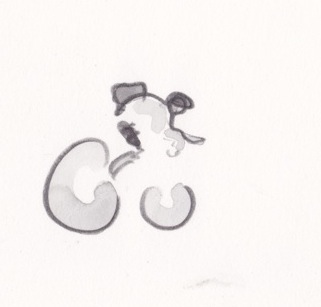 I would also say a few things to cyclists.  We defend our rights more easily when we respect others’ rights (crosswalks, sidewalks) and when we are aware of the slow and defenseless among us (pedestrians, octogenarians, librarians). While there are some open questions—Is it OK to roll through a stop sign? Is it OK to bike on the sidewalk if a street is cobblestone?—we all should abide by the City Cyclist Golden Rule: Do not put other people out. Essentially the same rules learned in nursery school: Don’t go up the down staircase, don’t run over kids, “green light red light,” and don’t bite.