Ladies and gentlemen of the jury, I swear that when I began writing this series, I had no intention of becoming a historical re-enactor. I’m not saying there’s anything wrong with the kind of people who dress up as Union and Confederate soldiers, say, and spend their weekend afternoons recreating bloody battles. I just didn’t see myself as that kind of guy—but I may have made that call a little early.

While researching my historic destinations, one place that came up in every conversation was the Merchant House Museum in Manhattan’s East Village. The home was built in 1832 and bought shortly thereafter by one Seabury Tredwell. Tredwell had a large merchant-class family (hence the house’s current name), two sons and five daughters, and most of them lived in the home for most of their lives, including a rotating assortment of nephews, nieces, and cousins. Born in the home in 1840, Gertrude Tredwell, the youngest daughter, died in an upstairs bedroom in 1933. She’d lived there alone the last 24 years, and fought to keep the home furnished and decorated in the exact condition it had known in the previous century, even as the surrounding neighborhood gave way to industrial and commercial growth.

Upon her death, George Chapman, a cousin of the family, purchased the building to save it from demolition. He used his connections to bring the home and its preserved state to the attention of well-to-do families like the Astors, who had been friends of the Tredwells, and with their assistance managed to turn the home into a museum, which would open to the public in 1936. According to its website, the museum was added to the National Register of Historic Places “not only for its 1832 late-Federal brick exterior but also for its Greek revival interior rooms.” I know virtually nothing about architecture, but maybe you know why this is significant.

Supposedly the place is haunted, and for their October calendar of events the operators of the museum offer ghost tours. I considered going on one of these tours, but then I noticed that on Sunday the 30th there was to be a funeral re-enactment for the patriarch, Seabury Tredwell himself, who died in 1865. Surely, I thought, this event will produce much more to write about. After I purchased the ticket, I noticed a recommendation that attendees wear “period-appropriate attire.” Eek!

Like I said, I don’t consider myself a historical re-enactor. I don’t even dress up for Halloween, unless I have a particularly persuasive reason to do so. But this was different. I wanted to blend in, to be a relatively unobserved observer for the events that would transpire. I wanted to show respect to the museum itself. So naturally I wore a black suit, a floppy/stringy bow tie, and I parted my hair with pomade as I’ve seen done in photographs from the era. Oh, and I thought impressive facial hair would be most fitting, but didn’t have time to grow it, so I bought a fake handlebar mustache.

On the day of the event, I showed up with my friend Bex, who’d agreed to accompany me and take pictures. (She wore a velvet gown and a black shawl, as well as white kid gloves.) When we arrived, I was actually glad we’d dressed the part because a majority of the audience did too. Many of the costumes were far more involved than ours, but we put more effort into it than some. I felt relieved. We mingled outside for a few minutes before the crowd of 30 or so was let into the house. 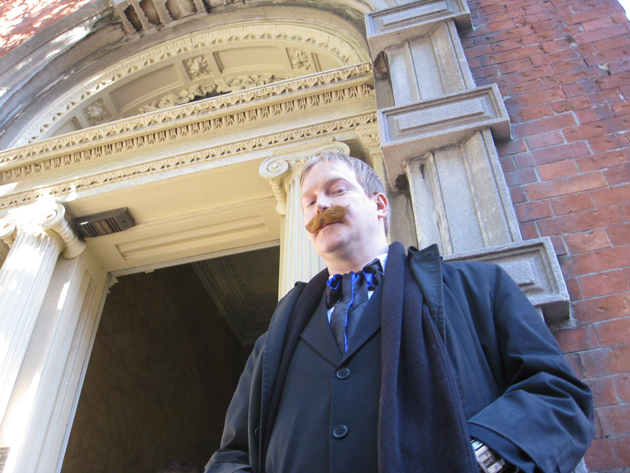 The front parlor had been turned into a funeral parlor, with a (closed, empty) casket at the front and rows of folding chairs throughout. Gaslights glowed eerily as the cast stood solemnly in front of the casket. The proceedings were introduced by a man who introduced himself as “John Cantrell” in a noticeably thick Italian Bay Ridge accent. He was playing the part of the sexton, or undertaker. After introducing the house he turned things over to “Julia Tredwell,” a bereaved daughter. She talked about Seabury, who died of kidney failure in March of 1865. (I’d been wondering if we were observing his actual death date, or if the event had been planned to coincide with Halloween. There was my answer.) “Julia” gave an account of customary funereal practices during the period, quoting extensively and lyrically from Washington Irving’s “Rural Funerals.” Apparently Tredwell’s original service was at St. Bartholomew’s Episcopal Church, which at the time was located a few blocks south on Second Street. Another of Tredwell’s “daughters” spoke about him, then a pastor re-enactor gave a sermon, hitting many of the trademark verses such as “Blessed are those who mourn, for they shall be comforted,” and “Oh Death, where is thy victory?” We were then obliged to sing “When Our Heads Are Bowed with Woe.”

Unfortunately I did not get to tour the rest of the house after the “funeral.” At its close, the sexton “John” then asked that six able-bodied men act as pallbearers and assist in transporting the coffin ahead of the procession to a nearby cemetery. Back then there would have been a horse-drawn carriage secured for the occasion, “John” explained, but those of us paying respects in 2011 are not so lucky. I volunteered not only because I figured, “Why not go all in?” but also because I would not be bragging to say there didn’t seem to be much more than six able-bodied men in attendance. We the audience gathered in front of the house, and I fully became a re-enactor as I helped hoist the coffin onto our shoulders. The pastor and sexton led the way, and we followed behind down East Fourth Street, the “family” of the deceased following shortly behind us. 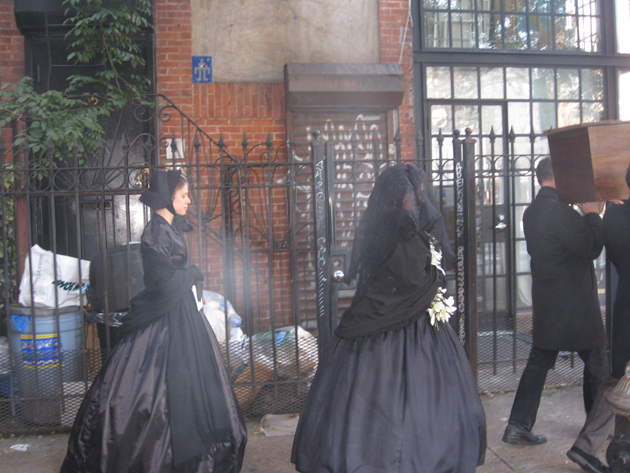 By the time we crossed the Bowery I was struggling to maintain my composure. Luckily, I had a fake mustache to cover my smirk, and since the coffin was not very long, I had to concentrate a great deal on synchronizing my steps with the gentleman in front of me so as not to flat-tire him. I still stepped on his heels a dozen or so times, apologizing profusely all the way.

A few blocks later we were let into the New York City Marble Cemetery on East Second Street, where Seabury Tredwell had originally been interred. We set the coffin down in the middle of the Tredwell family plot, and the pastor said a few more words before we were asked to join in another hymn, “Nearer My God to Thee,” the words having been provided in the program. Bex asked if I knew these hymns. I did not, but having grown up in a church-going family, I learned fairly early on how to follow a tune without much in the way of warning.

After that, Holly, the manager of the cemetery, which is also a historic landmark in its own right, gave a short talk on its history. The first interment was none other than U.S. President James Monroe, who died in New York City on July 4, 1831. His remains, like those of an estimated 1,000 others, were later moved to other resting places, but Holly made note that some 4,000 souls are still buried there, and they must be stacked very closely amongst each other because it’s not a big cemetery. Other notables presently interred there include Delanos, Roosevelts, Taylors, Kips (of Kips Bay fame), and former New York City Mayor and state Governor Stephen Allen. Also some guy named Preserved Fish is buried there. I know, right?

After Holly’s brief lecture, I wandered over to get a word with the undertaker. I said, “Your name’s John, right?” and he went along with it. I asked if he had a long history with the Merchant House and its events, but it turns out that it was his first day on the job. He’s a member of the New York Nineteenth Century Society, and some of his friends from the society had conscripted him into being an “instant sexton” as he put it. “John” started out as a toymaker (I didn’t catch whether this was by trade or only a hobby), and as he got into vintage children’s toys, he developed an interest in the history surrounding it. Along with the society, “John” is involved in the city’s steampunk scene, natch, and he invited me to meet the gang for drinks and a future event. I am cautiously considering. He then introduced me to “Julia,” whose real name is Eva. She told me “John’s” real name is Samuel, and I commend him for trying not to break character. 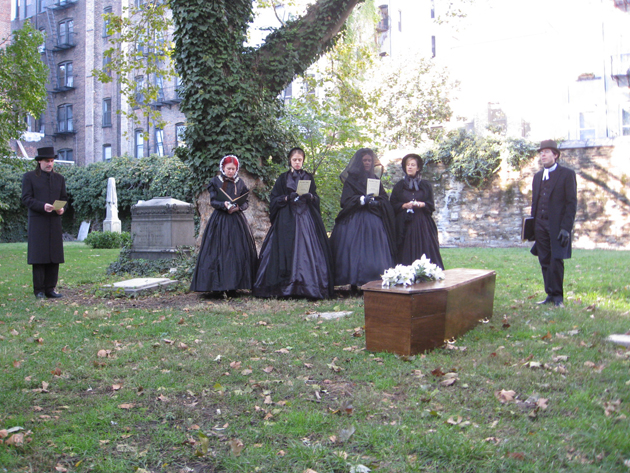 Eva, who like Sam seems to be about my age, is one of two founders of the NYNCS. It seems that the older the history buff you are in this area, the more historic your interests run. She was nice enough to fill me in on some of the details I’d missed from the service, like the name of the Irving selection and on her involvement with the Merchant House, where she is a director of events. While I was speaking with her and another of Tredwell’s “daughters,” a photographer furiously snapped pictures of us, even going so far as to shoo Bex out of frame. After I finished talking with Eva, I learned that the photographer’s name is Hal, and he happens to be one of the photographers involved in a current exhibition at the museum. He also gave me and Bex a juicy bit of trivia, which is that the focus of Werner Herzog’s documentary Grizzly Man, Timothy Treadwell, was a direct descendent of Seabury. Although now that I can Google it, the claim seems dubious since his Wikipedia page says Treadwell was born Timothy Dexter, albeit on Long Island. Anyway.

Sexton “John” Samuel then approached me and said, “Now, in the modern age, in this city, everyone knows that you can’t get something for nothing, and since you’ve gotten the information you sought—” and he paused, while I smiled politely, thinking to myself, “Is he gonna steampunk me?” or something of the sort, before he continued, “We could really use a hand getting the coffin back to the house.” Phew! I happily obliged once more, and it was much easier to carry with four instead of six guys and since we could forego the formality of pretending to carry a body inside. We got some great looks as we bore pall back through the East Village. I joked to Mike, the real name of the pastor across the casket from me, that I wouldn’t need to exercise again this week. He laughed and said something about finding it hard to find time to work out, which launched a heretofore unidentified photographer in front of me into rambling praise of something called Body Rock interval training. His recommendation continued until we arrived back at the museum. 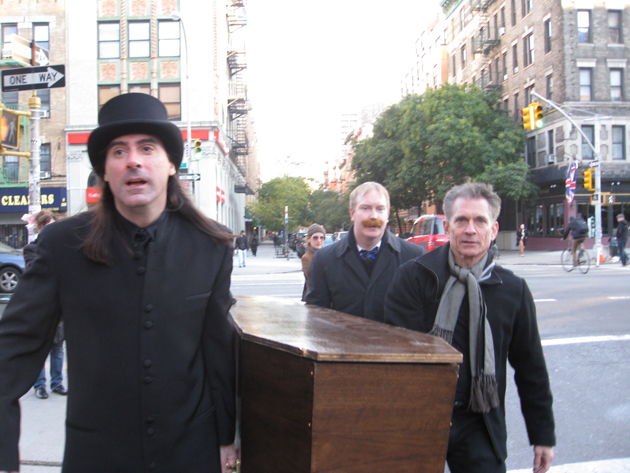 Climbing the stairs up to the Merchant House, the coffin’s cover slipped and glanced off of my unprotected head, drawing blood. I hesitate to suspect this was a result of haunting, or punishment for tempting the wrath of malignant spirits for not giving the gravity of the re-enactment a fully somber and sincere observance, but I can’t entirely rule it out either. I assured Sam and Mike, who appeared genuinely concerned, that I was OK. I was more embarrassed than anything. I wiped my hand over my head, deemed that it didn’t need immediate medical assistance, and then Bex and I left.

We walked back through a busy Washington Square Park filled with what must have been spill-out #OWS protestors doing the “human microphone” thing as the beautifully sunny day turned slowly into evening. I took off my mustache and arranged my hair to cover my wound. I have since fallen asleep and woken up without assistance a few times, so I don’t think I have a concussion. I’m probably fine.