On Saturday I took the subway farther north than I ever had, coming to the 5 train’s end at the Eastchester–Dyre Avenue stop. Technically I wasn’t even in the Bronx anymore, but in Westchester County. Walking about 10 minutes north from the stop put me at the National Historic Site of St. Paul’s Church in Mount Vernon, formerly colonial Eastchester. Construction on the church began on the Eastchester Village Green in 1763. The cemetery outside the church predates it, containing stones that date back to 1704. The church wasn’t finished by the start of the Revolutionary War, and wouldn’t be completed until Oct. 24, 1805. During that time, since the United States had disassociated from the Anglican church, St. Paul’s became incorporated under an Episcopal congregation.

I decided to visit the site last weekend because of an event commemorating the Battle of Pell’s Point, fought about a mile from the church on Oct. 18, 1776. It was a gorgeous day, and one of the first that truly felt like autumn here in New York. I talked my friend Paul into being my photographer for the day, and as we approached we could smell the wood burning to stoke the blacksmith’s fire. The church itself is quite beautiful in its modesty, small and quaint compared to the cathedrals of larger cities. The greatest incongruity comes in looking across the street, where the industrial community sprang up around the church in the centuries since its construction. From the entrance to the church you can see an auto body shop and various nondescript warehouses.

Immediately upon our arrival, a talk titled “Who Really Fought at Pell’s Point?” began in the museum (the old carriage house). I got a seat as the lights dimmed for the PowerPoint presentation. To be inordinately reductive, the answer to the talk’s central question is “us and them.” The longer answer, of course, covers the state militias, volunteer soldiers, and Washington’s conscriptions, on to the British standing army, Hessian auxiliaries, rangers, etc. The speaker, a former West Point instructor named Frank, spent the first hour of the talk establishing the setting, before getting to the first shots fired in the battle. Basically, as Washington’s troops were skedaddling north from their previous retreats at the battles of Long Island, Kip’s Bay, and Harlem Heights, they tarried in Eastchester, before having to fight their way out as the British tried to cut off their escape route up the Old Boston Road. The British were unsuccessful. What actually happened that day was kind of unclear, because Frank was hurried along by the period costumed event coordinator/town crier, so by the time he finally got to the battle proper, it was time to wrap things up.

The talk was probably about a half-hour longer than initially intended because so many in the audience, also history buffs (the most vocal and irrelevant of whom bore a striking resemblance to Tom Cruise’s character in Born on the Fourth of July, sans wheelchair), kept interrupting Frank, who to his credit handled their interruptions with admirable deference. Sitting next to me during the talk were two young boys in full soccer attire who squirmed through the first hour of the talk, one of whom kept kicking my leg with his cleats. On the other side of the boys was a very large, very drowsy man whose snores occasionally rumbled our side of the hall.

As a writer and editor of classroom materials, I’ve helped develop a number of social studies and history programs, and I often lament the focus on war and militarism in our cultural understanding of our national identity. World War II always gets its own chapter, while the labor movement is usually relegated to a subhead, if it gets covered at all. History books are written by the victors, of course, which is part of the reason I was listening to a retired lieutenant colonel explicating the divisions and key players of the Pell’s Point battle field that day. (An interesting side note: The battle was named for the property upon which it was fought, the Pell family farm. Frank suggested that many families caught in the crossfire would decisively split loyalties so as to avoid potential penalty following the conflict. The Pell family employed this defensive tactic, some pledging Loyalist support and others Patriot.) As much as I am against war in principle, it must be recognized that one side in a conflict occasionally has the moral high ground. One probably can’t be mutually for the inspiring demonstrations of the Arab Spring, for instance, and against our fight for independence from the British monarchy. I was still amused, however, that Frank made more direct comparisons between the general makeup and tactical advantages of the imperial British army of 1776 and our modern-day, largely imperial U.S. and coalition forces, currently deployed in more than 150 countries.

After the talk wrapped I was able to get a private audience with Frank, who is really a super nice guy. I asked if he taught military history at West Point, but it turns out that this is more just his hobby. He taught a class called “Officership,” which sounds like an ethics class. His big contribution to the scholarship surrounding the Battle of Pell’s Point is that, using archived pensioner’s accounts of the day of the battle, Frank was able to put General Washington in viewing distance of the skirmishes. Frank also brought my attention to a lesser known memorial in my neck of the woods, the Prison Ship Martyr’s Memorial in Fort Greene Park. According to Frank, there are 23 caskets filled with the unidentified remains of their number, making Fort Greene not only one of the bougiest neighborhoods but also the site of the largest mass grave in Brooklyn. By then the Born on the Fourth of July dude found Frank and rudely interrupted our conversation. I thanked Frank and slipped away. 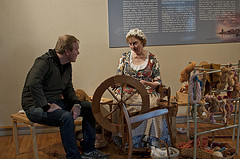 Nearby I found Dixie, the same spinner from my visit to the Hamilton Grange a few weeks ago. She didn’t really remember me, but we picked up the thread, so to speak, quickly enough. Her husband Hugh was also there that day, playing George Washington, horse and all. Both of them are regular employees for the National Park Service, a federal agency. This bears mentioning because she then explained that they also receive a federal tax exemption for their farm (they own the horse), before complaining about the public education and Medicaid they are forced to support via their tax dollars. Because I didn’t want to get into a full-blown political argument over the social contract with a sweet old lady who’s married to “George Washington,” I only replied, “Yeah, things are tough for a lot of people right now,” before cordially backing out of the conversation. I really do wish her and her husband well.

Paul and I strolled into the church. Since all the events were happening outside, we had it to ourselves. Though I am not religious, I do find churches lovely, quiet places that all but demand at least a moment of solemn introspection. Using funds raised by a committee chaired by Sara Delano Roosevelt (Franklin’s mom) in 1942, the church was restored to its original appearance based on a pew plan from 1787. The building was used as a hospital, barracks, and supply depot for both sides during the Revolutionary War. Following the Battle of Pell’s Point, for instance, the Hessian auxiliaries briefly encamped there.

We strode out in time to see the final firing demonstration by the militia re-enactors. They marched up the walk in formation, followed by “George Washington” on his mount. I saluted guiltily, unsure of just how flippant I was being. I mean, I genuinely love George Washington. From all I’ve learned about him, he was a truly great man, and I don’t even care that he wasn’t actually elected president. But this was “George Washington.” The militia, made up of very old men, was both adorable and a little sad. How long had these doddering patriots been playing toy soldier now? A small group of us followed them through the old cemetery to the far side, where they loaded their muskets and fired blanks away from the church, in the direction of the city.

Paul and I walked back through the gravestones, noting the final resting places of Patriot and Loyalist alike as further booming musket reports sounded at our backs. Within minutes we were back into the bustle of the Bronx proper, and riding the subway back toward Manhattan.