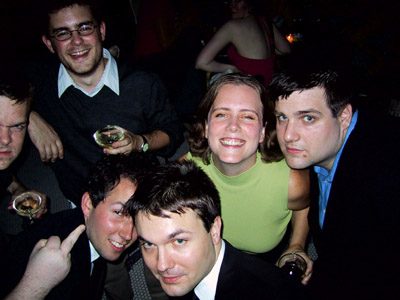 Thank you to everyone who came – it was a wonderful night, and we had a ball. Various head-counts put the crowd around 150-200 people, and though I can’t remember a single name of anyone I met for the first time, I do recall that everyone seemed to be having fun. DJs Jason Ray Ladewig and John 3:16 played perfect sets; Benjamin, owner of Royal Oak, opened up two bottles of the same champagne they served on the Titanic for a staff toast (we think this was a good thing, the Titanic bit) and we thank him for that, and for his great hospitality; even the readings were a hit and we plan on doing them again soon.

(The tiny keg of Beck’s that Paul brought to the after-party was also a big winner, and with better wisdom will be avoided in the future.)

As always, thank you for your support, and we promise, the next party will be much sooner than you think. Hope to see you there.