by Rosecrans Baldwin
At one point I wanted to scream, a giant whopping WOOOOH!!! right over the heads of everyone in the bar, but I held back and introduced myself to another new person and had another great, interesting, fun conversation with someone I’d never met before but enjoyed talking to, if only for five minutes. 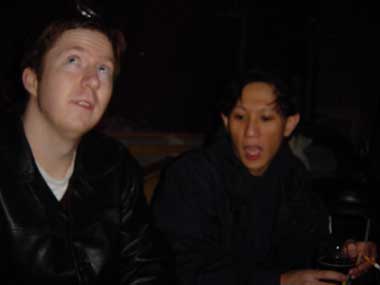 I don’t think I met these guys

We had a birthday party. And it went better than we expected. I don’t know if anyone made out, but I think people had fun.

First, our thanks to Bobby and the staff at The Rain Lounge. They did a good job keeping people drunk, and the room, once packed, was perfectly warm. I’m sure whoever broke the glass is very sorry. 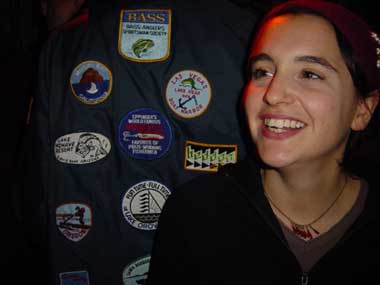 Zoe, and John’s back, I think

Second, our tremendous thanks to everyone who came out. About 18 people RSVP’d, and we’re guessing, on a conservative scale, that about 60-80 people showed up. 60-80 people who probably knew one or two other people in the room – I find that tremendous, being that I was nervous as hell at the idea of meeting new people. Of course, those jitters go away in the first minute, and then everything turns fun. 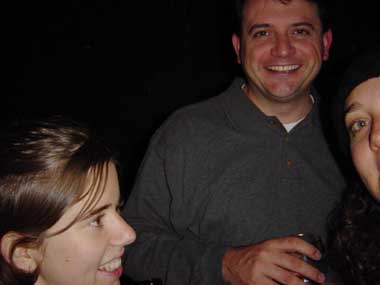 Kevin Guilfoile... I am not kidding

Third, we could not have been more surprised or ecstatic (and apparently the look on our faces was the proof) when we learned that Jim Coudal and Kevin Guilfoile had flown in from Chicago that afternoon, landed in Newark, had dinner with friends in Brooklyn (after a $70 cab ride from the hotel), then came to our party – the reason they had flown all the way from Chicago – and shocked the hell out of us. They took a six-thirty flight back this morning, and apparently had a wild cab ride trying to reach the hotel by the airport, so all we can say is thank you thank you thank you. Paul, I remember, jumped over a couch when he saw Kevin. That was pretty much our reaction too. It is a very nice thing to meet people you’ve known only by email and phone conversations for two years and find they’re exactly the superior type of people you expected.

Since the reason for the party was directly connected to the Internet, there were plenty of people with web sites, though an impressively low amount of geek-talk… a list that I can remember off the top of my head goes something like this: David, Dennis, Chris, Sean, Maggie, Anil, Clay, Agnieszka, John, Paul, Michael, Kevin and Jim, Rion, Fred & Zoe, Petter, Zoya, Chris, and probably lots of people who introduced themselves and I promptly forgot (sorry!). 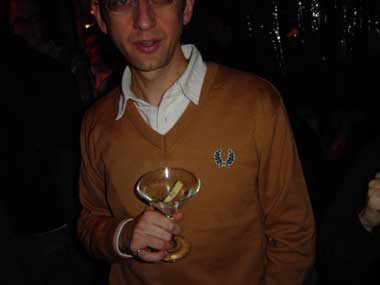 The worst part of the party was that Andrew was sick. Really really sick. Sick to the point where he was there for an hour, huddled in his peacoat, and that was only after Kevin called him to say he was in from Chicago and Andrew decided that even ebola could be ignored for good friends from far away. He is rumored to be recovering.

So, it was great. We will have to do it again sometime. To everyone who came, thank you, and more importantly, to everyone who has read and supported the site for the past three years, thank you thank you thank you. That’s the motto of the day. The funny thing is, our birthday isn’t until November 18th, though it doesn’t really matter: the date means very little. I picked it two years ago when I couldn’t remember the exact date we started the site (but I knew it was in November) and decided if my sister’s birthday was good enough for her, it’s good enough for us. So happy birthday Leslie, 11 days early.

And finally, to the woman who came especially to meet Andrew and was apparently quite disappointed when he wasn’t there, we’re sorry, and we hope you can make it next time – he’s bound to be better by then.

all photos by frederic bonn